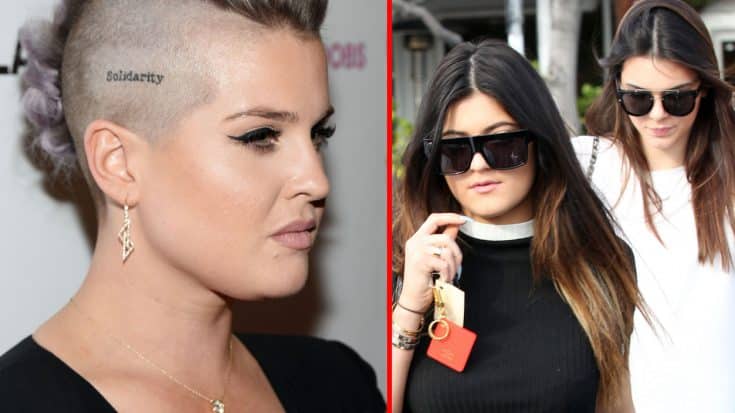 The Hits Just Keep On Coming!

It’s been a long few days for sisters Kendall and Kylie Jenner, who late last week came under fire for the less than stellar decision to market their own “brand new vintage” band t-shirts, but with a twist: their giant ‘KK’ logo for their brand, Kendall and Kylie, and selfies of Kendall Jenner plastered over the original band’s artwork. They’ve since issued an apology after being slammed by cease-and-desists and in the case of The Doors, a lawsuit, but the girls are learning the hard way that sometimes “I’m sorry” isn’t enough.

After it was brought to her attention that the Jenner girls had defaced one of Ozzy Osbourne’s t-shirts, Sharon Osbourne stepped into the fray to offer some friendly advice, warning the girls to “stick to what you know…lip gloss” – but it wasn’t over until daughter Kelly got involved and delivered a one-two punch of her own.

Kelly, 32, took to Instagram to offer up a t-shirt design of her own that summed up everyone’s feelings on the situation, earning more than a few laughs in the process as she revealed a white t-shirt with the Jenner girls on it…covered up by a bright purple image of Kelly Osbourne making a less than polite gesture in their direction:

Ouch. That one hurts, but something tells me it got the point across to the Jenner girls loud and clear!