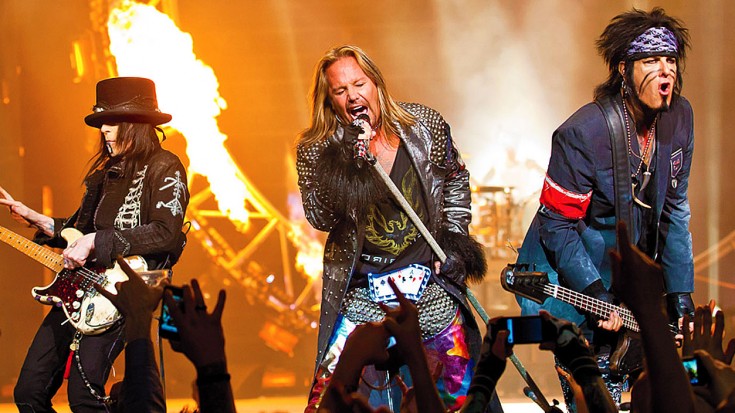 Los Angeles rockers Mötley Crüe said goodbye last New Year’s Eve after a 35 year run, choosing to end their career just blocks away from the Sunset Strip where their career began a lifetime ago. In an emotionally charged night jam packed with girls, pyrotechnics and an incident with drummer Tommy Lee’s Cruecifly rollercoaster, Mötley Crüe thrilled and delighted fans one last time with classics like “Home Sweet Home” and “Kickstart My Heart” – but the party really got going when the boys dusted off old favorite “Girls, Girls, Girls” one last time, a moment that was very luckily caught on camera and took centerstage on the band’s 2016 concert film The End.

Fun Fact: The song references several strip clubs, including the Sunset Strip’s own Tropicana, The Body Shop, and Seventh Veil.

Guys, if you never got the chance to see Mötley Crüe perform “Girls, Girls, Girls” live, you really missed out; it’s every bit as over the top as you would expect, a high octane free for all complete with singing and dancing backup singers supporting frontman Vince Neil for the song’s chorus and the entire band looking like there’s nowhere else they’d rather be, despite later reports of infighting and backstage drama. Be sure to check out their new concert film Mötley Crüe: The End as soon as you can but in the meantime, you can see the last ever performance of “Girls, Girls, Girls” in the video below!