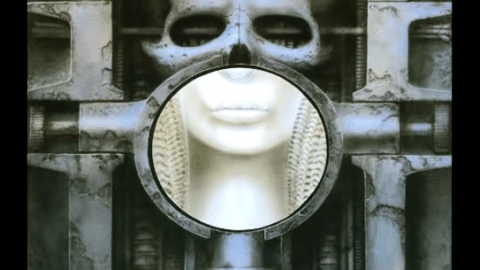 Welcome back my friends to the show that never ends!

On November 19, 1973, progressive rock band Emerson, Lake & Palmer released their fourth studio album Brain Salad Surgery. It was their most ambitious record. And though they wanted to be able to perform the songs live without difficulty (compared to the highly complex material from Trilogy), they still used sophisticated and cutting-edge technology during recording.

With Brain Salad Surgery, ELP pushed the envelope and created music which became a template for progressive rock. It showcased the band at the peak of their creativity. It’s powerful, loud and heavy and proof that ELP was way ahead of their time.

“We were still ascending when we made Brain Salad Surgery. We were enjoying a sensational amount of success, and I suppose we felt as if we could do anything – and we certainly tried. Musically, lyrically and visually, we really went for it.” – Keith Emerson

It’s a good album from beginning to end but the real highlight is Karn Evil 9 which is almost 30 minutes long. It’s futuristic, elaborate, and complex – all the things you’d expect from ELP. They pulled out all the stops for this piece and it paid off nicely. Even four decades after its release, it remains a standard by which all others are measured. And while it overshadows the rest of the tracks, the other songs also have their moments. They may not be as brilliant or as over-the-top as Karn Evil 9 but they were definitely far from being just fillers.

Brain Salad Surgery is ELP’s loudest record but it was well-balanced thanks to the romantic ballad Still…You Turn Me On. And though this poetic and beautiful song isn’t as epic as Karn Evil 9, it’s testament to the band’s musicianship and the lengths they go through to make magic with their music.

With its success, it was clear that the band would never achieve anything like it ever again.