20 Years Ago: Hell In ‘Paradise City’ As Slash Is Kicked Out Of Guns N’ Roses 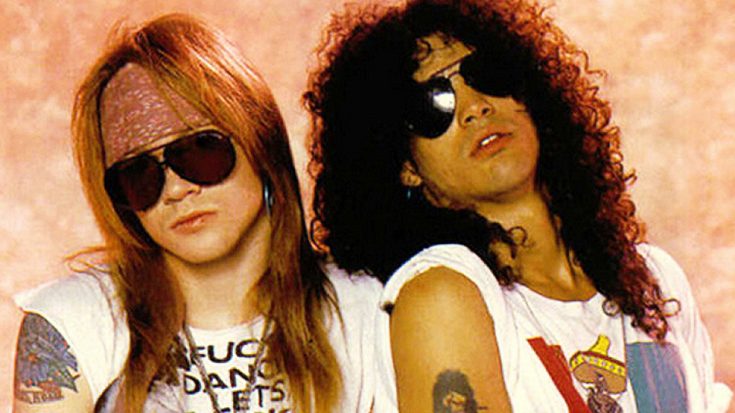 Halloween 1996 will forever live as a dark day in the history of Guns N’ Roses. It will go down as the day beloved guitarist Slash, and his long locks and top hat, were kicked out of the band. Following the band’s 1991 album release, drummer Steven Adler was fired, and guitarist Izzy Stradlin left the group. By the mid 90’s, it seemed as if frontman Axl Rose had seized full control of the group, which didn’t sit well with Slash.

Slash decided to blow off some steam, and joined a side project called Slash’s Snakepit with a few former Guns N’ Roses members and a member of Alice and Chains. The band recorded one record, and more details began to surface about the unknown tensions within GNR. Slash claimed that Rose was controlling, and even went as far as kicking a few members out without consulting other members of the band.

Tensions grew when the band found themselves being forced to record a Rolling Stone’s cover of “Sympathy For the Devil,” for a movie called Interview With the Vampire. Tensions hit a peak when Slash discovered that Axl was having new rythm guitarist Paul Tobias record over Slash’s guitar parts. Slash took time off from GNR to calm himself down and focused on Slash’s Snakepit, but on October 31st, 1996, Axl sent a fax to MTV proclaiming that Slash was out of GNR.

Though it was a difficult time, we can be thankful now that the members have moved passed it, and are now back together touring, and possibly planning to record a new album!