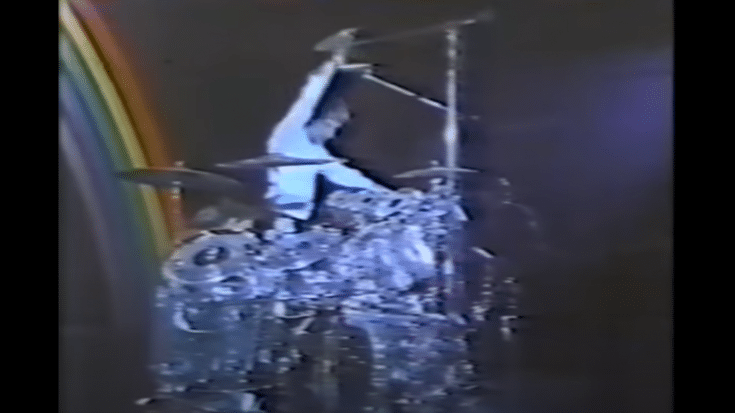 A Madman At Work

On October 8, 1974, Keith Moon took to the stage on the Wide World in Concert: Midnight Special to perform a jaw-dropping drum solo. For this, he used a transparent kit and because Moon always liked to go over the top, he added a live goldfish to one of the clear Ludwig Vistalite series floor toms. He had countless stage antics over the years – from filling his set with explosives and other crazy stunts. This is just one of them. Moon even had a cat face paint on.

As he went wild on the drums, some of the audience members ended up dancing to the beat. Because really, why not?

After the performance, somebody asked him: “What happens with your goldfish?” He jokingly responded with, “Well, I mean, you know, even the best drummers get hungry.”

Keith Moon was always flashy and extra on stage. The attitude, energy, and power – he was unmatched behind the kit. Speaking about his image, he told Rolling Stone: “I suppose to most people I’m probably seen as an amiable idiot . . . a genial twit. I think I must be a victim of circumstance, really. Most of it’s me own doing. I’m a victim of me own practical jokes. I suppose that reflects a rather selfish attitude: I like to be the recipient of me own doings. Nine times out of ten I am. I set traps and fall into them. Oh-ha-ha-ha Ha-Ha-Ha-Ha Ha! Of course the biggest danger is becoming a parody.”