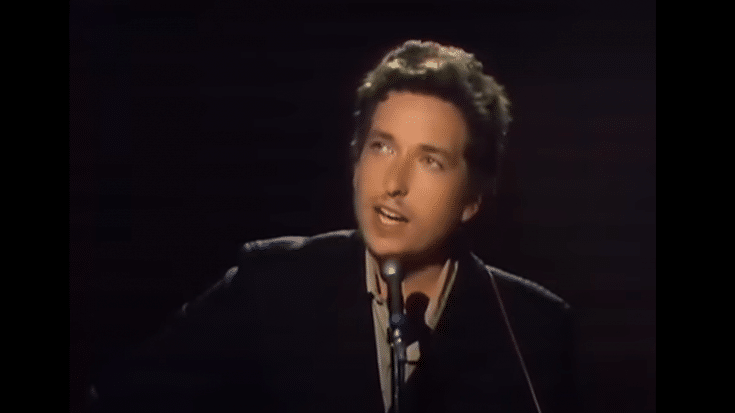 Speaking about Bob Dylan and the kind of music he gives, it’s best to expect the unexpected. In other words, you may describe him as someone who never plays by the rules. Dylan’s six-decade catalog, which ranges from blues ballads to religious rock to standard selections, implies that there is no rule book when it comes to his music.

Trying to make sense of any Dylan song is pointless. Part of his intrigue is his music’s ambiguity. Lyrics can be interpreted in dozens of different ways and arrangements change from year to year as Dylan comes up with new ways to present his songs. But until now, some of his tracks have consistently left listeners scratching their heads.

Some of these songs can be considered second-rate compared to Dylan’s masterpieces, but it’s also worth noting some of his strangest songs are among his best and most popular. From curious cover choices to unorthodox original numbers, we offer the 10 Weirdest Bob Dylan Songs below.

9. “Ugliest Girl in the World” (from 1988’s Down in the Groove)
Co-written with Grateful Dead lyricist Robert Hunter, the song’s blues-rock arrangement isn’t necessarily unappealing. Dylan’s vocal performance is strong enough, but those lyrics can make you scratch your head. “Well, the woman I love, she got a hook in her nose / Her eyebrows meet, she wears second-hand clothes.” Plus, the backing singers emphasize a crude sentiment: “Man, she’s ugly, got to be ugly.”

8. “Wiggle Wiggle” (from 1990’s Under the Red Sky)
According to this Dylan song, if you wiggle enough, you’ll end up vomiting fire and raising the dead. The album, which featured several high-profile guest appearances, was dedicated to “Gabby Goo Goo,” most likely Dylan’s 4-year-old daughter. That might explain the nursery rhyme cadence of “Wiggle Wiggle,” but later admitted he wasn’t in the strongest of songwriting places back then.

7. “New Pony” (from 1978’s Street Legal)
In the beginning, you might think Dylan is singing about a new pet named Lucifer, who needs to be put down after breaking a leg. However, as the song progresses, it becomes more evident that the pony is a metaphor for a woman, an object of intense sexual desire.

6. “Spanish Is the Loving Tongue” (from 1973’s Dylan)
It is the song that is more of a showcase for the nasal tone Dylan started using in 1969. About midway through, the track picks up speed, but the Spanish-flavored song remains more curious than essential.

5. “Lenny Bruce” (from 1981’s Shot of Love)
A song that is dedicated to a convicted stand-up comedian. The track features Dylan solo at the piano, singing forlornly. Dylan said he wrote that song in five minutes and recalled:

“That is true, I rode with him once in a taxi cab. I found it was a little strange after he died, that people made such a hero out of him. When he was alive, he couldn’t even get a break. And certainly, now, comedy is rank, dirty and vulgar and very unfunny and stupid, wishy-washy and the whole thing.”

3. “Polka Dots and Moonbeams” (from 2016’s Fallen Angels)
In this song, Dylan doesn’t enter until the song is halfway over. He describes it as a “pug-nosed dream” of a woman who captures his heart. It’s sorta like “Ugliest Girl in the World,” but far more romantic.

2. “If Dogs Run Free” (from 1970’s New Morning)
Probably the strangest part of this song is the scat singing by Maeretha Stewart, a voice actress whose work includes The Wiz, Schoolhouse Rock! and Sesame Street. At worst, it’s a bizarre-sounding song that sits in the middle of the divisive 1970 LP; at best it’s an intriguing attempt at something different.

1. “Bob Dylan’s 115th Dream” (from 1965’s Bringing It All Back Home)
Described as a roller-coaster ride of a song whose cast of characters includes cops, Englishmen, a Guernsey cow, a girl from France and somebody named Captain Arab, a playful reference to Moby-Dick’s Captain Ahab. The song is a great example of Dylan painting a vivid portrait using only words. Totally absurd!