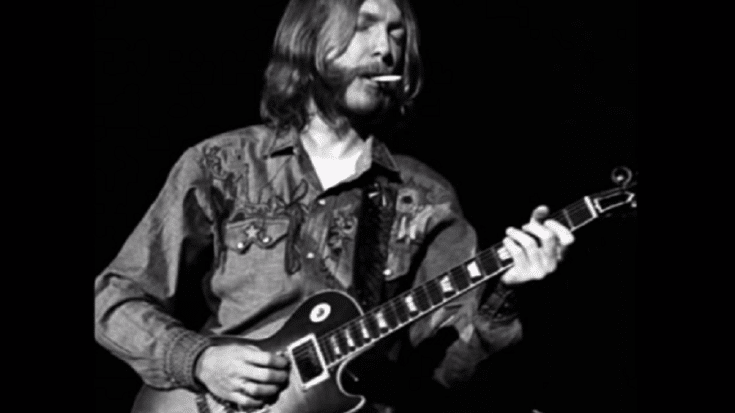 Is there anything better than a face-melting guitar solo? It’s not just about the axeslinger taking center stage but it’s more about him displaying his sheer mastery of the instrument. And of course, we’ll also take into consideration the solo itself – the originality and its complexity.

The following solos have become templates for every guitar player. In their own way, they became standards by which others were measured. And even today, they continue to influence the musicians who followed them. Let’s check them out.

Featured in Cream’s final album, Goodbye, “I’m So Glad” was recorded live at The Forum, Los Angeles on October 19, 1968. Originally recorded by Skip James, when he heard Cream’s version and how it was well-received, he said:

“That piece is absolutely gonna stand.”

Eric Clapton’s virtuosity is in full display once again proving why he’s hailed as a guitar hero.

One of the most underrated guitarists of all time, Alex Lifeson perfectly exemplifies that you can have the best of both worlds as a shredder – that is, have the technical skill and feeling. Being a shredder doesn’t always mean lightning fast fingers, that’s part of it sure, but another thing that Lifeson accomplished in this solo is how he managed to squeeze the listener’s soul.

We don’t normally include two pieces from the same artist in every list but it’s Jimi Hendrix, the guy even guitar heroes look up to, so we’re more than glad to make an exception. With his performance of the National Anthem at Woodstock, he proved that you don’t need words to make a statement – a guitar solo can be just as powerful and effective.

Eddie Van Halen steered away from his usual start-to-finish wild solo. Instead, he starts out slow and it gradually builds up. That’s understandable given that this is actually one of the most personal songs he’s ever made. This was created as a tribute to his son Wolfgang’s birth who was born on March 16, 1991. Get it? 316 is March 16.

Randy Rhoads was a force of nature. Just listen to that guitar solo and tell us that isn’t the meanest, heaviest, and most monstrous tone you’ve ever heard. The man was an absolute beast at the guitar.

Did the people in the audience realize just how lucky they were to witness this magnificent solo? To David Gilmour, it’s just another performance but to everyone else, this is one monumental feat – it truly is on another level. Anyone who thinks he’s overrated needs to see this video because only Gilmour can pull this off. It grips your soul and it’s almost like a religious experience.

You know you’re doing it right when you’ve rendered Eric Clapton speechless. Allman was only 24 years old when he passed away but he left this world a legend. He had several exemplary works but this one stands out. He elevated the whole song with his solo!

If you’re looking for THE best version of this epic tune, this is it. It’s heavy, it’s badass, it’s SRV at his absolute best. And many have tried but no one can ever play like him. It’s not just the strings he used or even his style, it’s the man himself and the music oozing out of his fingers.

It’s the solo that made several men pick up the guitar and start playing. To say that this is Jimmy Page’s finest guitar work is debatable only because for him, excellent is the minimum requirement and he always managed to up the ante with every solo. But it’s clearly one of the greatest solos in existence. When he was asked about it though, Page admitted it was “very good.” However:

“Is ‘Stairway to Heaven’ my best Zeppelin guitar solo? No, but it’s pretty damn good.The solo was done very quickly. In actual fact there were already layers underneath. The bottleneck you can hear was on before the solo…

“If everyone else says it’s my best solo then that’s great, that’s good, but there are others that I prefer.”

Jimi’s brilliance and genius showed through with his solos. The sheer amount of power on “Machine Gun” alone is enough to convince us that he was not from this world. It’s like the rock gods convened and decided to give us a taste of greatness like this.