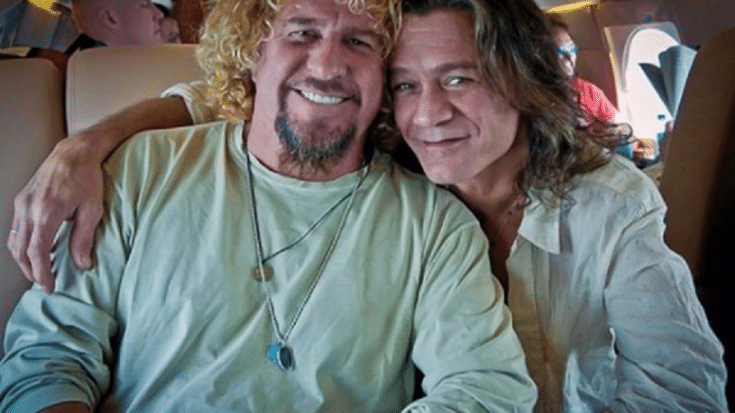 EVH Had Been Waiting For His Call

In the last few months before Eddie Van Halen’s untimely death, Sammy Hagar reached out to him and renewed their friendship. After years of bad blood between them, they finally buried the hatchet and reconciled.

In a new interview with Angi Taylor on Chicago’s 95.5 FM, the Red Rocker recalls: “When I called him, after years of not speaking, back in February, I think, or January, whatever it was — before COVID — he said, ‘What took you so long?’ It put the biggest smile on my face. I said, ‘Oh my God. Don’t ask me.’ That was just very touching to me: ‘Hey, I’ve been waitin’.'”

Speaking about it, he says: “Looking back, if we wouldn’t have come to terms with that feud we were having after the [2004] reunion tour. I wouldn’t have been able to come to grips with it. It would have been way too much for me, ’cause I’m still grieving my ass off… But the grieving is starting to make… It feels like, hey, we had a great thing. This music will live on forever — beyond me. I’ll sing it for the rest of my life. When I’m gone, hopefully some young bands come up and play that music. And you can always play it in your homes.”

In a note he sent to The Howard Stern Show, Hagar shared that he and EVH agreed to keep their reconciliation from the press because it might get people’s hopes up on the possibility of a reunion which they knew, wouldn’t happen.

Heartbroken and speechless. My love to the family.