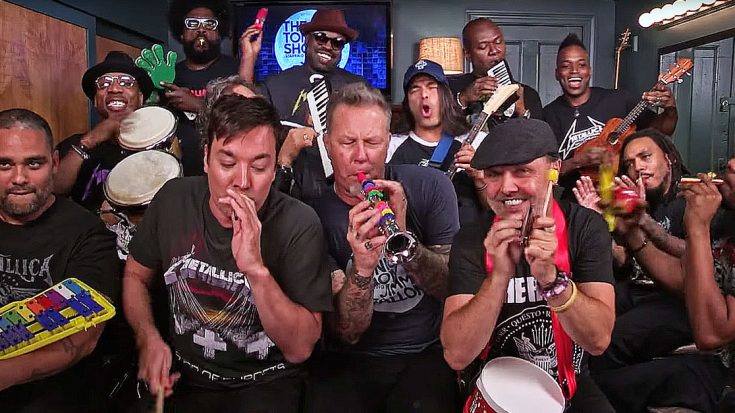 photo credit: YouTube via The Tonight Show With Jimmy Fallon

Metallica Goes Back To The Sandbox

You may be cool, but you’ll never be ‘James Hetfield shredding on a toy flute to his own song,’ cool as evidenced by last night’s episode of The Late Show With Jimmy Fallon. The thrash legends hung out with Jimmy Fallon in anticipation of their upcoming album Hardwired…To Self Destruct, and were awesome enough to participate in one of our favorite segments, joining Jimmy Fallon and The Roots for an “Enter Sandman” jam session done entirely on children’s toy classroom instruments and guys, buckle up because we guarantee that you’ve never seen Metallica have this much fun before!

Everyone in the room – with the exception of the band itself – rocked a Metallica t-shirt for the segment and with James Hetfield taking the lead on vocals and a small plastic flute, “Enter Sandman” became the stuff of daycare nightmares as kazoos, xylophones, toy drums and plastic keyboards took the place of electric instruments to the delight of Metallica, who are clearly having way too much fun shredding on toys they remember their own children playing with. We love Metallica, but there’s nothing we love more than seeing one of the biggest, baddest, heaviest bands around cut loose and let themselves be kids again, and that’s something I think we can all agree on. Check it out in the video below (and feel free to grab your own kid’s toys and jam along!)