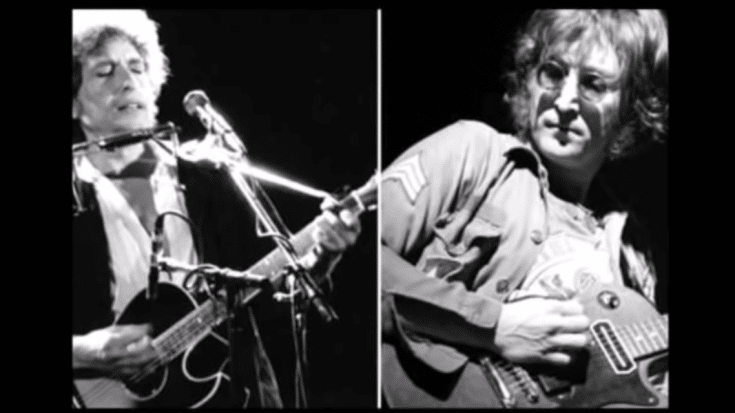 Did They Influence Each Other?

Bob Dylan wasn’t just one of John Lennon’s favorite artists but the folk rock icon also heavily influenced The Beatles especially in terms of songwriting – two examples of which include “I’m a Loser” and “You’ve Got to Hide Your Love Away.” Lennon once gushed about The Freewheelin’ Bob Dylan which he said, “For three weeks in Paris, we didn’t stop playing it. We all went potty about Dylan.” He even talked about Dylan in several interviews and mentioned him in his songs.

On May 27, 1966, both rockstars hung out with each other and in fact, it was captured on film by director D.A. Pennebaker for Eat the Document. They were clearly stoned after spending the night at Lennon’s home in Weybridge which isn’t surprising given that Dylan introduced The Beatles to cannabis. They were in the back of a limousine, driving around London’s Hyde Park.

Pennebaker told Gadfly magazine in 1999, “They had a funny relationship to begin with. In this particular scene it was as if they were trying to invent something for me that would be amusing in some way, but at the same time they were doing it for each other… It was not exactly a conversation by any means. Dylan was so beside himself and in such a terrible state that after a while I don’t think he knew what he was saying.”

It’s a pretty interesting video, to say the least. You can watch it a couple of times and not fully understand what they were talking about.

Lennon recalled the incident to Rolling Stone‘s Jann Wenner, “We were both in shades and both on fucking junk, and all these freaks around us. I was anxious as shit. … In the film, I’m just blabbing off and commenting all the time, like you do when you’re very high or stoned. I had been up all night. We were being smart alecks, it’s terrible. But it was his scene, that was the problem for me. It was his movie. I was on his territory, that’s why I was so nervous.”

They had a pretty tense relationship and when Dylan asked Lennon to be part of the film, Lennon “thought ‘Why? What? He’s going to put me down.’ I went all through this terrible thing”. Dylan’s “4th Time Around” was said to be a parody of Lennon’s “Norwegian Wood”. And Lennon, who was known for being difficult to please, praised Dylan every chance he got but Dylan did not return the favor.

Now the question remains, was their relationship one-sided?

Simply looking at interviews and their works, it’s easy to conclude that Dylan did not have such a high opinion of Lennon even though the latter basically worshipped the ground he walked on. But upon closer inspection, that’s clearly far from the truth. Dylan may not have openly admitted it but The Beatles influenced his music too, particularly went he spent the mid-’60s taking a huge leap from being a folk icon to a full-fledged rockstar with a trilogy of albums that showcased him going “electric.”

According to Beatles road manager Neil Aspinall, “Dylan liked to say how much the Beatles learned from him. John used to mutter, ‘He learned a bit from us, too.'”

Dylan and Lennon once again saw each other during the 1969 Isle of Wight Festival. In 1980 however, Lennon told Playboy magazine that he “stopped listening to Dylan with both ears.” And he took jabs at Dylan in “God” (“I don’t believe in Zimmerman”) and “Serve Yourself” which was a parody of Dylan’s “Gotta Serve Somebody” from his 1979 album “Slow Train Coming” – the LP he released after his conversion to Christianity.

And Lennon had plenty to say about that.

Lennon told David Sheff, “If Dylan is into Jesus because of needing to belong, whatever, perhaps the next step will be to see the good of the experience as well as the other side… I must say I was surprised when old Bobby boy did go that way. I was very surprised. But I was also surprised when he went to that Jewish group.”

But in his diary tape from September 5, 1979, Lennon wasn’t so polite: “Gotta Serve Somebody… guess he [Dylan] wants to be a waiter now.”

Years later, Dylan wrote a tribute to Lennon titled “Roll On John” from his 2012 album “Tempest.” It even referenced The Beatles’ “Come Together” and “A Day in the Life.”

Asked why he wrote it, Dylan told Rolling Stone: “I just felt like doing it, and now would be as good a time as any… We were all about the same age and heard the same exact things growing up. Our paths crossed at a certain time, and we both had faced a lot of adversity. We even had that in common. I wish that he was still here because we could talk about a lot of things now.”