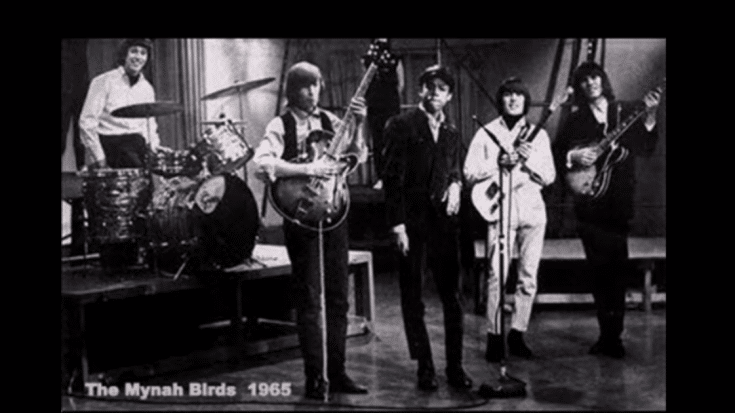 Neil Young and the late Rick James had a one-time collaboration which has since been largely forgotten. In the mid-’60s, Young was the guitarist of a Toronto R&B band called The Mynah Birds. They were the first mostly white act which landed a record deal with Motown Records and their lead singer was Rick James.

This was before Young joined CSNY and James went the funk route. But The Mynah Birds was more than just a jumping-off point for both artists. From their sound to their soulful vocals, their music is undoubtedly great.

According to author Jimmy McDonough who wrote the Neil Young biography Shakey, “The Mynah Birds—in black leather jackets, yellow turtlenecks and boots—had quite a surreal scene going…. Those lucky enough to see any of the band’s few gigs say they were electrifying. ‘Neil would stop playing lead, do a harp solo, throw the harmonica way up in the air and Ricky would catch it and continue the solo.’”

Young told McDonough about what it was like working with James. He said, “Ricky was great. He was a little bit touchy, dominating — but a good guy. Had a lot of talent. Really wanted to make it bad. Runnin’ from the draft. I wasn’t a driving force behind the Mynah Birds – I was the lead guitar player; Ricky was the front man. He’s out there doin’ all that shit and I was back there playin’ a little rhythm, a little lead, groovin’ along with my bro Bruce. We were havin’ a good time.”

Young also recalled how influential The Rolling Stones were to them especially James. He shared, “We got more and more into how cool the Stones were. How simple they were and how cool it was.”

In 2014, Young talked about sharing an apartment in Toronto with James on The Howard Stern Show: “We did some wild things. It’s all very hazy to me now. I’m glad I made it through that stage. It got a little dicey. There were some drugs going on. I remember singing one song for about a day and a half.”

When the manager they fired told Motown Records that James was AWOL from the Navy, he was taken by the authorities and their tapes were shelved.