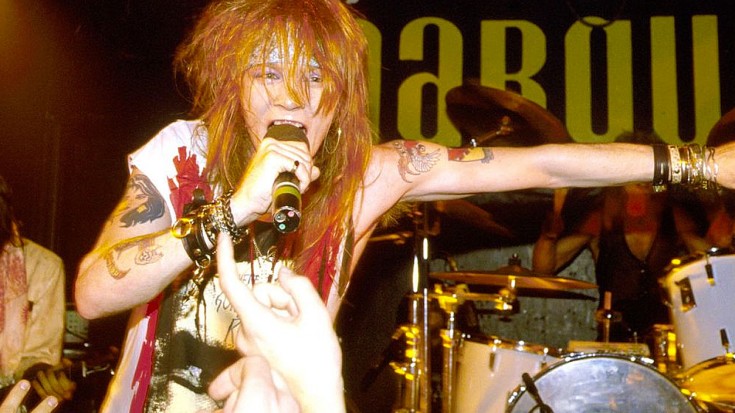 Long before Axl Rose and his band were singing about places where the grass is green and the girls are pretty, they were cranking out AC/DC covers at their live shows – and they weren’t half bad. In fact, with the media firestorm surrounding Axl as fans debate whether or not he’s slated to step into Brian Johnson’s spot as lead singer for AC/DC, one might even say that if the news is true, Axl’s been rehearsing for his moment with the band for over 3 decades!

As a result of the rumors flying around, audio of Guns N’ Roses’ 1987 performance at London’s Marquee Club has recently surfaced and with it, the 7 minute clip of the guys performing AC/DC’s “Whole Lotta Rosie,” giving fans of both Guns N’ Roses and AC/DC the chance to hear what a potential Axl Rose and AC/DC (or, AXL/DC if you will) collaboration might sound like.

Fun Fact: “Whole Lotta Rosie” was inspired by an obese Tasmanian woman with whom Bon Scott had a one night stand.

In the audio, you’ll hear a then 25-year-old Axl Rose making the disclaimer that he “ain’t no Bon Scott” before launching into AC/DC’s classic tune about a woman with a big heart and an even bigger…appetite, shall we say. Axl’s right – he ain’t no Bon Scott, but this audio is sure to get fans of both bands talking!