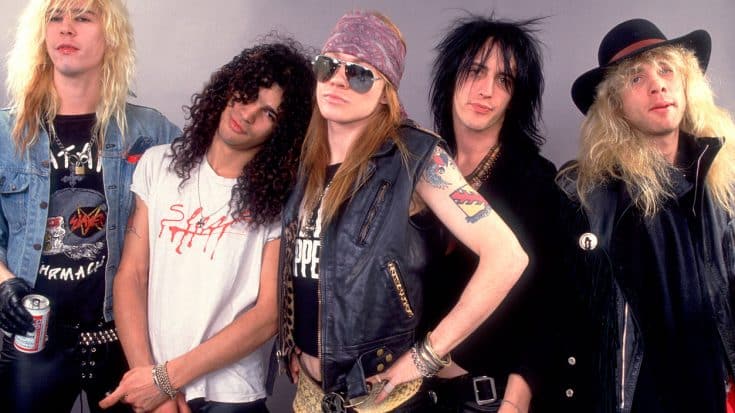 After 2 years, Guns N’ Roses have beaten the odds and managed to not only have a successful reunion tour, but avoided self-destructing in the process. If you’ve seen the newest incarnation of Guns N’ Roses then you know – they’re so much fun that you’re allowed to forget who isn’t onstage with them (ahemSTEVENADLER), but a brand new revelation from former Guns manager Alan Niven just changed all of that.

Apparently, not only was Izzy Stradlin initially open to the idea of reuniting with Axl, Slash, and Duff, Niven says he actually got as far as flying out and going through soundcheck last year before leaving abruptly, never to return.

No one really knows. Niven, who stayed on as Stradlin’s manager after Guns N’ Roses cut him loose, says that “[Izzy] did get as far as flying out and doing a soundcheck, and he left after a soundcheck, he didn’t want to have anything to do with it” and that the incident happened while Guns N’ Roses were “somewhere out in the midwest, when they were doing stadiums.”

Presumably, everything was going relatively well – that is, until:

“But something must have really upset him, because he left after the soundcheck, and never turned up for another one or an appearance. I would think right now he is probably a little pissed off.”

The only thing that comes to mind in this case is the same grievance Stradlin had with Guns N’ Roses in the early days of the reunion: money. In a now-deleted tweet from September 2016, Stradlin responded to speculation as to why he wasn’t involved with Guns N’ Roses’ reunion, calling shenanigans on any other explanation than that they – meaning Axl, Slash, and Duff – “didn’t want to split the loot equally “.

If what Niven is saying is true and Izzy really did fly all the way out to the Midwest for a performance only to leave after soundcheck, it stands to reason that something was said during soundcheck regarding money that angered Stradlin enough to just say to hell with it all and head home.

To think: we were THIS close to the Guns N’ Roses reunion of our dreams (Axl Rosenberg over at MetalSucks thinks this all went down in Cincinnati, which would make sense as that’s where former drummer Steven Adler joined the band for a few songs) and it was dashed by someone saying the wrong thing. We’ll likely never know what went down that day, but here’s hoping that that bridge isn’t too badly burned; we’d love to see Izzy and even Steven back with the gang at least one more time.

In the meantime, imagine what could have been in this super neat video of Guns N’ Roses rocking The Ritz in 1988!