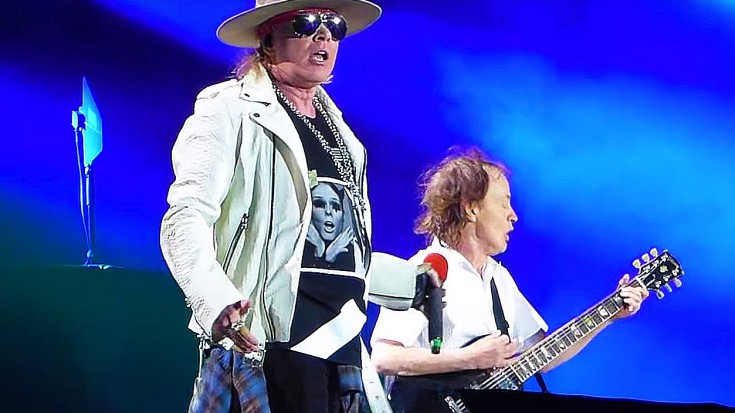 Song Debuts For First Time Since 1979

Rock legends AC/DC are really pulling out all the stops on their European Rock Or Bust Tour and making some serious rock and roll history in the process! Not only is Axl Rose now up and walking for most of the show, the band keeps dusting off AC/DC classics that haven’t seen the light of day in a few years – and in this case, decades. Saturday night’s show in Prague proved to be particularly special for fans of the Australian rockers, who surprised everyone with a performance of “Touch Too Much,” a deep cut from 1979’s Highway To Hell – making it the first performance of the song since December 14, 1979 at France’s Théâtre de Verdure.

Fun Fact: In his first ‘interview’ in years, Axl revealed that his favorite AC/DC song is actually “Touch Too Much”.

The band’s sixth show to feature Rose on lead vocals, Rock Or Bust seems to be chugging right along beautifully with Axl getting more and more comfortable in his role as AC/DC’s interim lead singer and fans becoming more and more receptive to what he’s got to offer the band, especially on a classic like this – that last note at 4:30 is proof enough! If you weren’t lucky enough to catch “Touch Too Much” the first time around or even this weekend, never fear: we’ve got fan shot footage of this Highway To Hell deep cut ready and rarin’ to go for you in the footage below!