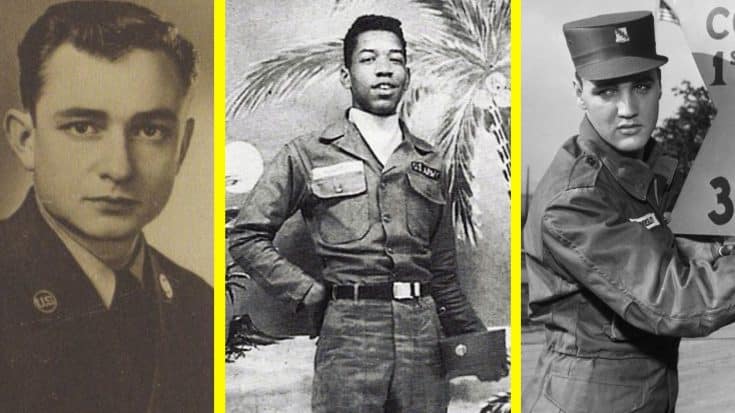 Jerry Garcia, lead guitarist and vocalist of legendary rock band The Grateful Dead, was enlisted in the United States Army as a punishment for stealing his mother’s car.

He went through basic training at Fort Ord. Afterwards, he was transferred to Fort Winfield Scott in the Presidio of San Francisco. Garcia’s time in the Army was short lived as he would intentionally miss roll calls and often went AWOL. He was discharged the same year.

On December 16, 1957, Elvis Presley was officially drafted to the United States Army via the Memphis Draft Board. Presley alternatively had the option to join the Special Services where he would only have to do basic training and just perform music for the Army. Wanting to prove that his already massive popularity was not a factor, he opted to join general recruitment.

On January 20, 1960, towards the end of his service, Presley was promoted to sergeant. He also became a pistol sharpshooter.During a press conference just before his discharge, he was asked about this and why he ultimately chose to become a ‘regular soldier’ as opposed to joining the Special Services and he said…

“I was in a funny position. Actually, that’s the only way it could be. People were expecting me to mess up, to goof up in one way or another. They thought I couldn’t take it and so forth, and I was determined to go to any limits to prove otherwise, not only to the people who were wondering, but to myself”.

John Fogerty, founder of Creedence Clearwater Revival and the man who doesn’t age, began his service in the Army in 1966 to serve in the Vietnam War. The day he got his draft notice he went to a local United States Army Reserve to be signed up immediately.

Fogerty served at Fort Bragg, Fort Knox and Fort Lee. He was discharged in July 1967 and started CCR soon after.

What more is there to say about Willie Nelson? He is a musician, actor, philanthropist, and overall just one of the most lovable people in the whole world. But what you may not have know is that he was briefly in the Air Force.

Nelson joined the Air Force right after graduating high school in 1950. Unfortunately, he was discharged soon after due to back problems. But even to this day he performs often for the men and woman serving in the United States military.

Much like Jerry Garcia, Jimi Hendrix’s time in the Army was a result of a punishment. In his younger years Hendrix had been caught twice driving in stolen cars. He was given the option of either serving time in jail or enlisting in the Army. He ultimately chose the Army and trained to be a Paratrooper at the 101st Airborne Division and was later stationed at Fort Campbell, Kentucky. He even received the prestigious Screaming Eagles patch on January 11, 1962 from Major General C. W. G. Rich.

Legendary singer songwriter Johnny Cash enlisted in the United States Air Force on July 7, 1950. He completed his basic training at Lackland Air Force Base and technical training at Brooks Air Force Base. He was assigned to the 12th Radio Squadron Mobile of the U.S. Air Force Security Service as a Morse code operator intercepting Soviet Army transmissions.

It was during his service that he wrote much of the music that is still popular today. In past interviews he often referred to his time in the Air Force as one of his greatest creative tools.