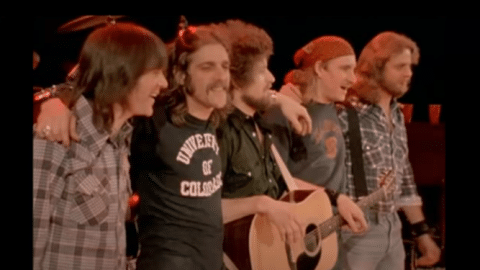 Written by Jack Tempchin, “Peaceful Easy Feeling” was the third single from the Eagle’s debut album. It didn’t crack the top 20 on the US Billboard Hot 100 but it became one of their best-known and most enduring songs. Here are facts about it:

1. Tempchin wrote this at a time when he was still performing at coffee shops and small clubs in San Diego. Following a gig in nearby El Centro, he ended up sleeping on the floor of the club, and started writing the lyrics on the back of a flyer.

2. In Los Angeles, he hung out with other musicians like Glenn Frey, Jackson Browne, J.D. Souther, and many more. One time, Frey came over his place and heard him playing “Peaceful Easy Feeling”.

After Tempchin gave Frey a cassette recording, the latter came back the next day with a demo.

3. The flyer where Tempchin wrote the lyrics is in the Grammy Museum.

The ceremony was held at the Der Wienerschnitzel restaurant where Tempchin finished the song. He was also awarded with a gold wiener. “Lots of people have Grammys,” he said of the special award. “But they don’t have a solid gold wiener.”