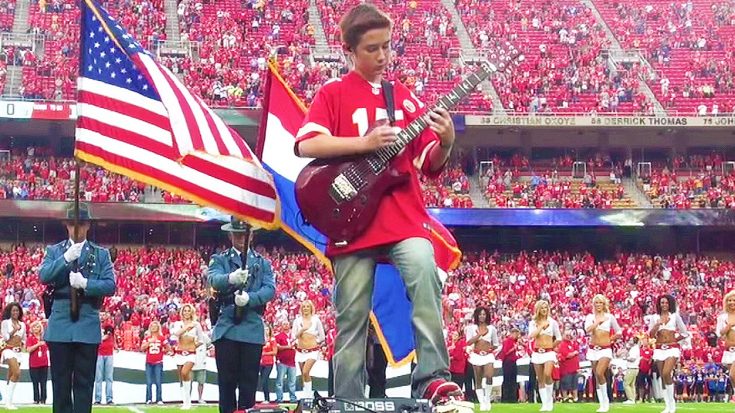 Land of the Free, Home of the Shred

Playing the National Anthem prior to a sporting event is an honor, but it’s also one of the most difficult things to do as well! The lyrics are very easy to forget, especially when there’s so much pressure on you. Prior to the preseason game between the Kansas City Chiefs and Tennessee Titans last season, 12-year old Aidan Fisher took on the difficult task, and played the song on his electric guitar, just like Jimi Hendrix at Woodstock! Aiden’s rendition was slightly different than Hendrix’s, but it still impressed everyone in attendance and made America proud!

“I certainly remember feeling tremendous pressure and responsibility when he started ‘The Star-Spangled Banner. If you look at the footage closely, he looked right over at me as if to say, ‘Listen to this. You’re gonna love it.’ It was an amazing version.”– Michael Wadleigh, camraman who shot Jimi’s performance at Woodstock

Aidan’s performance of the song is one of the most American things we’ve ever seen! A great American past-time like football being started by a rock n’ roll version of the “Star Spangled Banner” just screams America! Aidan should be proud of his amazing performance, and we hope he continues bringing us great stuff like this in the future!

Watch Aidan’s amazing performance down below!