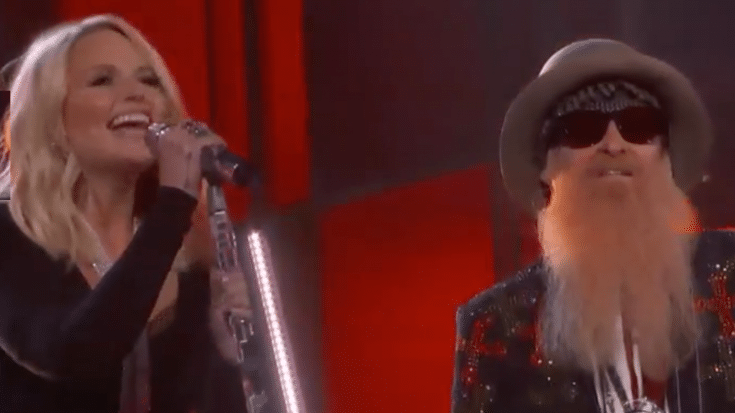 We thought country star Eric Church’s touching tribute to late rock legends David Bowie, Lemmy Kilmister, Glenn Frey and Scott Weiland would be it for classic rock at last night’s Academy of Country Music Awards, but the night held yet another fun surprise for America’s rock set towards the end of the ceremony. Much to our delight, ZZ Top’s Billy Gibbons hit the stage last night for an electrifying take on “Tush” that really got the crowd on its feet and movin’ – but if that wasn’t enough to sweeten the pot, he brought along friends and country megastars Miranda Lambert and Keith Urban to help him out with the ZZ Top classic, and it’s as much fun as you’d expect anything featuring Billy Gibbons to be!

Fun Fact: The late Jimi Hendrix was a huge fan of Billy. So big, in fact, that Jimi told The Tonight Show and The Dick Cavett Show that Gibbons would be the ‘next hottest guitarist’ – and boy, was he right!

With Miranda on vocals and having the time of her life, Billy was free to shred away on his Gibson SG, trading licks with Urban who absolutely nailed those solos, bringing an entirely brand new, high energy feel to the already deliciously rowdy “Tush”. Whether you’re a classic rock fan, a devoted country fan or fall somewhere in between, there’s no way that you’ll be able to sit still in your seats once the party starts – this all-star matchup between Billy, Keith, and Miranda is just that good!