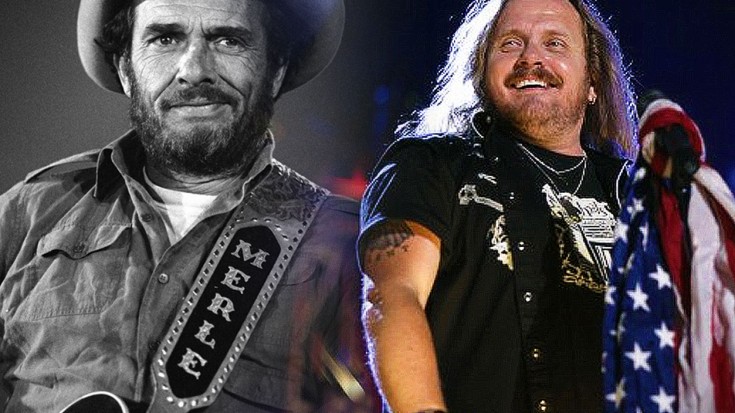 “We’d Like To Dedicate This Song To Mr. Merle Haggard!”

Known affectionately to fans, friends and family as “The Hag,” outlaw country legend Merle Haggard’s influence was felt in both the rock and country worlds, influencing bands like Lynyrd Skynyrd who credit the late country star with their intense love of music that began as children growing up listening to his records.

The Southern rock legends recently embarked on their highly anticipated summer tour with fellow rock legend Peter Frampton, dusting off some of their most timeless songs like “Sweet Home Alabama” and “Gimme Three Steps” – but fans were delighted to find that Lynyrd Skynyrd carved out a moment on each stop on the tour to celebrate Merle’s legacy with “Honky Tonk Night Time Man”.

Fun Fact: According to setlist.fm, “Honky Tonk Night Time Man” has only been performed by Lynyrd Skynyrd a handful of times in recent memory.

“We just lost one of our greats. So tonight we’d like to dedicate this next song to Mr. Merle Haggard. A little bit of Bakersfield!” announces Johnny Van Zant before Lynyrd Skynyrd launches into the 1974 classic, playing a spot on takeoff of the version of “Honky Tonk Night Time Man” featured on Street Survivors complete with band member callouts, a twinkling piano solo from Peter Keys and two absolutely stellar guitar solos from Rickey Medlocke and Sparky Matejka, who channels the spirit of late Skynyrd axeman Steve Gaines in this spirited salute to a legend.

We may have lost one of our greats, but one thing’s for sure: with great bands like Lynyrd Skynyrd keeping his music alive, Merle is sure to live on forever!