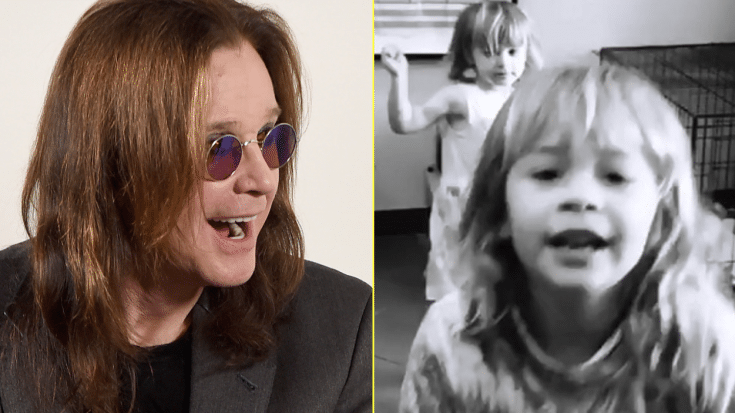 How Cute Is This?

Ozzy Osbourne is feeling much better following last month’s hospital stay and battle with pneumonia, but that’s not stopping his biggest fans from trying to make him feel even better!

The youngest of Ozzy’s eight grandchildren, Pearl and Andy Rose Osbourne teamed up (with the help of special guest and little sister Minnie, who critiqued their routine from her high chair) to bring grandpa Ozzy what is possibly the most adorable performance of “Crazy Train” ever.

The video, shared by son Jack Osbourne to Instagram, was seen worldwide when proud grandma Sharon showed it off on The Talk earlier this week, revealing that the kids “did that to make their papa feel better” as Ozzy continues to recover from his latest bout of serious illness.

It’s been a rough go for Ozzy recently. As we reported last month, the rock legend was sidelined by a diagnosis left his doctor fearful that what began as an upper-respiratory infection could turn into pneumonia – not a far fetched possibility given how intense his shows are, paired with the cold weather currently hitting Europe.

A statement was issued just a little while ago on Ozzy’s behalf:

These days he’s on the mend, and just a few days ago Jack and Sharon gave a hilarious but honest update on how Ozzy is doing. “Well, if this gauges where he’s at, he’s complaining a lot and he’s back to his normal routine. So everything’s A-okay there,” laughed Jack while Sharon confirmed her son’s assessment of his dad’s health, saying “That’s always a good sign, when he complains and he’s miserable. Then you know it’s good.”

Looks like little Pearl and Andy Rose’s sweet tribute to their papa is working just fine!