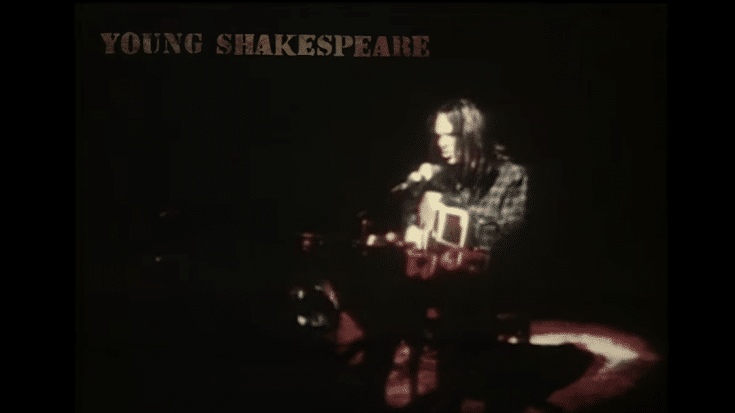 Neil Young is on a roll.

He’s prepping to release a lost live album and concert film titled Young Shakespeare that was recorded on January 22, 1971 at the Shakespeare Theater in Stratford, Connecticut. This solo acoustic show happened a few months after After the Gold Rush hit the shelves and only three days after his famed gig at Toronto’s Massey Hall. Filmed by a German TV crew, the footage stayed in the vault for fifty years and has never seen the light of day until now.

Interestingly, it’s the earliest known video of Young in a solo concert.

Young recently released a trailer to preview it which you can check out below. It will be available on vinyl and CD, and a stand-alone DVD. A Deluxe Box Set Edition features all three formats plus bonus material, out on March 26.

Young wrote, “‘Young Shakespeare’ is a very special event […] Personal and emotional, for me, it defines that time,” Young said of the new release, which was recorded just days after his performance at Massey Hall in Toronto, also released as a live album in 2007. [Producer] John Hanlon and I both feel ‘Shakespeare’ is superior to our beloved Massey Hall. A more calm performance, without the celebratory atmosphere of Massey Hall, captured live on 16mm film.”