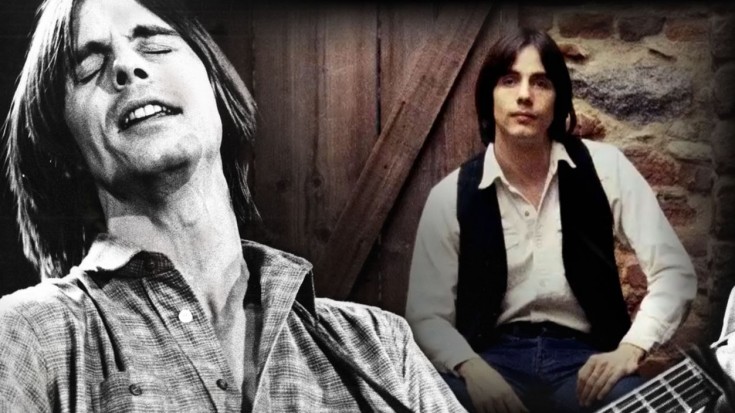 A Gift From Jackson Browne to the Eagles

Recorded in 1972 by the Eagles, ‘Take It Easy’ has roots as a Jackson Browne original. This catchy, country tinged tune that warns against getting too big, too fast was originally meant for Browne’s debut album, Jackson Browne until Browne ran into the problem almost every songwriter runs into: he didn’t know how to finish it.

Until neighbor and friend Glenn Frey of the Eagles came in, that is. Frey finished the second verse, beginning with:

Jackson loved the arrangement Frey came up with; so much, in fact, that he decided to let Frey have it for the Eagles’ debut studio album, released later that year.

Browne’s rendition of ‘Take It Easy’ has a few similarities to that of the final released by the Eagles, but it’s got a few more differences that set the two apart. It’s slightly slower than that of the Eagles, with the higher harmony provided by special guest Glenn Frey as opposed to the Eagles’ duo of Randy Meisner and Don Henley.

Fans of both the Eagles and Jackson Browne will definitely appreciate this version; while it’s a little more subdued than what the Eagles released, the easygoing nature of this rendition is something to be admired!

Take it easy, take it easy
Don’t let the sound of your own wheels
Drive you crazy
Lighten up while you still can
Don’t even try to understand
Just find a place to make your stand
And take it easy

Well, I’m a standin’ on a corner
In Winslow, Arizona
Such a fine sight to see
It’s a girl my Lord
in a flat-bed Ford
Slowin’ down to take a look at me

Come on, baby, don’t say maybe
I gotta know if your sweet love
Is gonna save me
We may lose and we may win
Though we will never be here again
So open up I’m climbin’ in
So take it easy

Well, I’m a runnin’ down the road
Tryin’ to loosen my load
Got a world of trouble on my mind
Lookin’ for a lover
Who won’t blow my cover
She’s so hard to find

Take it easy, take it easy
Don’t let the sound of your own wheels
Make you crazy
Come on baby, don’t say maybe
I gotta know if your sweet love
Is gonna save me

Oh we got it easy
We oughta take it easy