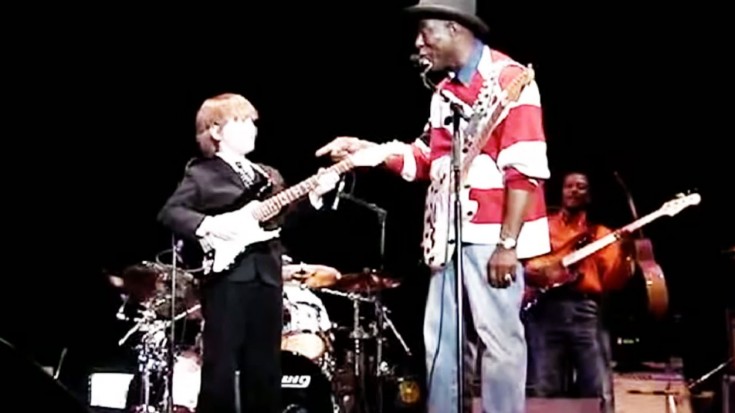 This video just made me smile. It’s great when you get invited for an impromptu jam but what if you get to share the stage with not just anyone but a legendary blues musician and one of the guitar greats?

Wouldn’t that be the most amazing thing ever? I’m not surprised that Quinn Sullivan, now 16 years old, has been making a name for himself and taking the world by storm. In this footage, he was only 8 years old when he got invited by — wait for it — Buddy Guy!

The Rolling Stone magazine ranked Guy at number 30 on their list of 100 Greatest Guitarists of All Time and Eric Clapton also referred to him as “the best guitar player alive”! Wow, just wow! That’s one for the books. I bet it would forever be one of Quinn’s best memories. Hands down fantastic! It gives you hope for the future of blues music. There’s nothing cooler than this!

“I had to unplug his amplifier to make sure it was him. I’m like, “There’s no way in the world you can play these notes. He was hitting Eric Clapton, he was hitting me, Stevie, Jimi Hendrix. I couldn’t even play a radio when I was seven or eight years old! Players like him come along once in a lifetime. I said, ‘I need to let the world know about you.'” – Buddy Guy

And sure enough, Guy let the whole world know about Sullivan and his massive guitar skills. In fact, they’ve been touring together for years with Sullivan as his guest but somehow, the kid knows how to steal the spotlight especially when it comes to his solos. He is young, sure, but he plays like a seasoned pro. And for that, he has performed alongside other music legends like B.B. King, Keith Richards, and Eric Clapton.

Having so many blues masters sing his praises speaks volumes of his talent.