If Given The Chance, Axl Rose Would Thank Freddie Mercury For Teaching Him This 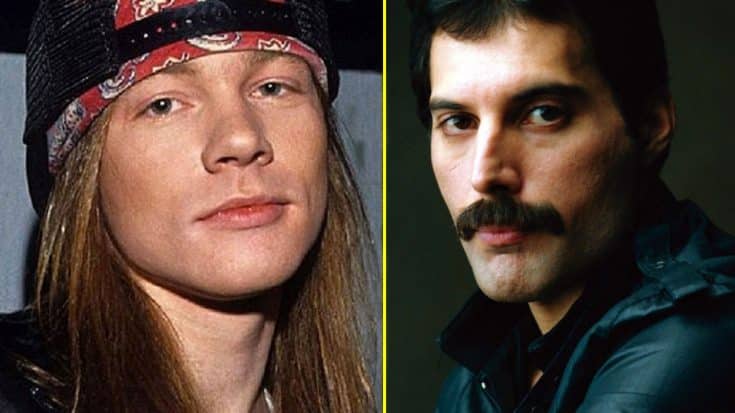 “I Don’t Know Where I Would Be,” Muses Axl

Everyone, it seems, has a story about how Freddie Mercury changed their life. While the stories vary from person to person, the larger, overarching theme seems to revolve around his musical genius and the ways in which it inspired people to forget everything they thought they knew about music and create the impossible – something Guns N’ Roses frontman Axl Rose credits the late Queen singer with more than 25 years after his death at the age of 46.

In Axl’s case, Freddie’s music was a source of comfort and inspiration for the small town boy from Indiana; growing up in an abusive, oppressive religious household where music was considered evil, it’s hard to imagine that this environment would ultimately birth the frontman of Guns N’ Roses – but thanks to Freddie’s fearless, unapologetic nature coming through in his lyrics and teaching Axl to dream and go beyond what he thought he knew, it did:

“If I hadn’t had Freddie Mercury’s lyrics to hold onto as a kid, I don’t know where I would be. It taught me about all forms of music…it would open my mind. I never really had a bigger teacher in my whole life.”

To repay Freddie for writing the songs that would inspire Guns N’ Roses’ classics like “November Rain” and ambitious projects like Use Your Illusion I and II and Chinese Democracy, Axl took the stage at The Freddie Mercury Tribute Concert following the singer’s death to serve up blistering takes on “We Will Rock You” and the ever iconic “Bohemian Rhapsody”. Check it out in the video below!