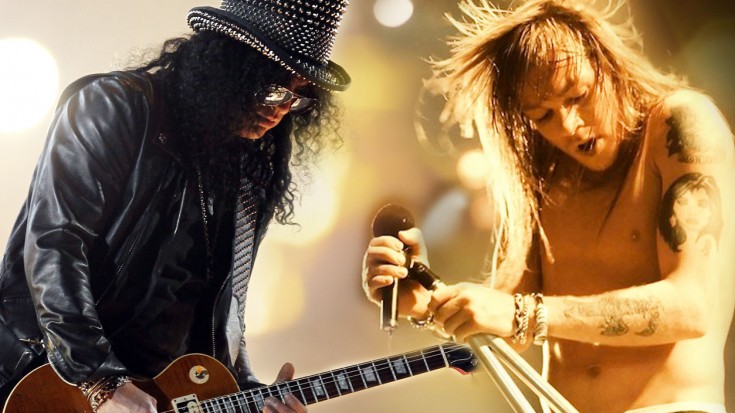 Written by Guns N’ Roses, ‘Estranged’ was the band’s attempt at vulnerability, and not only was it a major hit, it was a major tour staple during Guns N’ Roses’ Use Your Illusion Tour.

Did you know…that Axl Rose wrote ‘Estranged’ after a bad dream?

The song itself is about loss and feeling hollow, and was written during his divorce and later separation from a girlfriend – both of which weighed heavily on Axl.

It’s both tragic and beautiful that artists like Guns N’ Roses were able to create some of their most memorable songs from the ashes of hard times.

Guns N’ Roses dominated Tokyo when they performed in 1992 to crowds of screaming fans. No wonder the Use Your Illusion Tour was so successful!

Dizzy Reed took up piano duties during live performances of ‘Estranged’ so that Axl was able to focus on singing and entertaining his audience as only he could!

I really miss this incarnation of Guns N’ Roses. We may never see this kind of talent ever again, but I’m glad that they’ve become a rock and roll urban legend because of amazing performances like this!

So nobody ever told you baby
How it was gonna be
So what’ll happen to you baby
Guess we’ll have to wait and see
ONE, TWO

Still talkin’ to myself
and nobody’s home
(Alone)

When I find out all the reasons
Maybe I’ll find another way
Find another day
With all the changing seasons of my life
Maybe I’ll get it right next time
An now that you’ve been broken down
Got your head out of the clouds
You’re back down on the ground
And you don’t talk so loud
An you don’t walk so proud
Any more, and what for

Well I jumped into the river
Too many times to make it home
I’m out here on my own, an drifting all alone
If it doesn’t show give it time
To read between the lines
‘Cause I see the storm getting closer
And the waves they get so high
Seems everything We’ve ever known’s here
Why must it drift away and die

I’ll never find anyone to replace you
Guess I’ll have to make it thru, this time- Oh this time
Without you