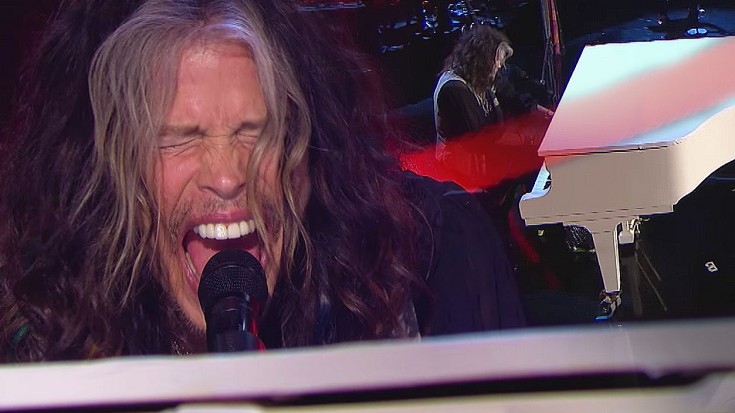 Written in 1972 and featured on Aerosmith’s 1973 debut album, “Dream On” is the power ballad to end all power ballads; equal parts rock and roll mixed with something fiercely inspiring, it’s an anthem for winners, survivors, and anyone with a dream far bigger than themselves, making its presence at the 2014 Nobel Peace Prize Concert more than perfect! Aerosmith frontman Steven Tyler was tapped to perform at the event, and just before a rousing performance of Extreme’s “More Than Words” with Nuno Bettencourt, Tyler sat down at his piano where he absolutely dazzled with “Dream On”. What better way to encourage people to do their part to save the world than to inspire them through one of the greatest arena anthems ever written?

In its 21st year, the Nobel Peace Prize Concert added an element of art to a celebration of the world’s best and brightest minds currently working to make the world a better place – something Steven was fiercely proud to be part of:

“I am excited to bring rock ‘n’ roll to this incredible night, honoring some of the world’s most courageous activists,” Tyler said in a statement.

If Steven’s performance doesn’t get to you – how on earth does he still hit that high note? – then rest assured: the choir backing him will. Clad in black, these young men and women are the perfect backdrop to an otherwise stunning performance from one of rock’s leading men, and it’s something you definitely do not want to miss!

Make sure to check out Steven’s performance with special guest, Nuno Bettencourt!