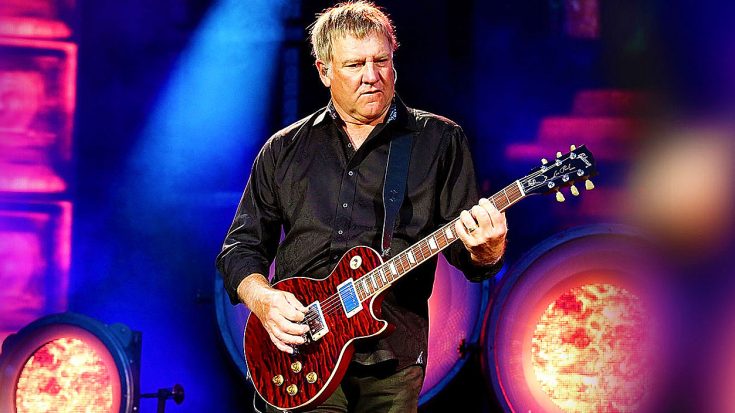 Alex Lifeson reveals a few hints on what to expect from his post-Rush band’s Envy of None self-titled debut album.

At the beginning of the year, Lifeson has announced some details about the upcoming album on April 8. They have already released their first single “Liar.” Rush guitarist Lifeson is joined by Coney Hatch bassist Andy Curran, guitarist Alfio Annibalini, and singer Maiah Wynne.

In a new interview with Guitar World, Lifeson shared about the new album:

“There’s lots of straight-ahead guitar, but there’s also mandola and lots of manipulated, sequenced things. And I’ve really become an aficionado of backwards guitar as well. So there’s everything from acoustic fingerstyle stuff to really heavy stuff, trippy kind of backwards things to Hendrix-y melodic parts. I’m really quite pleased with it. We have 10 songs and they’re all sounding really, really cool.”

Lifeson then spoke about the idea of reuniting with former Rush member Geddy Lee for a musical project. He explained:

“We’re not putting any pressure on it or anything. We had a lot of good years together and we still love each other very much. I talk to Geddy every other day – we’re best friends. There’s more to our life together than just writing music. So if it happens, it happens. And it’ll happen when it happens.”

Rush called it quits and went their separate ways after the death of the band’s legendary drummer Neil Peart in 2020. Meanwhile, Rush released a track from the previously unreleased concert album Live in YYZ 1981, which will be presented as part of the 40th anniversary edition of Moving Pictures to be released on April 15.

Listen to “Vital Signs” below.