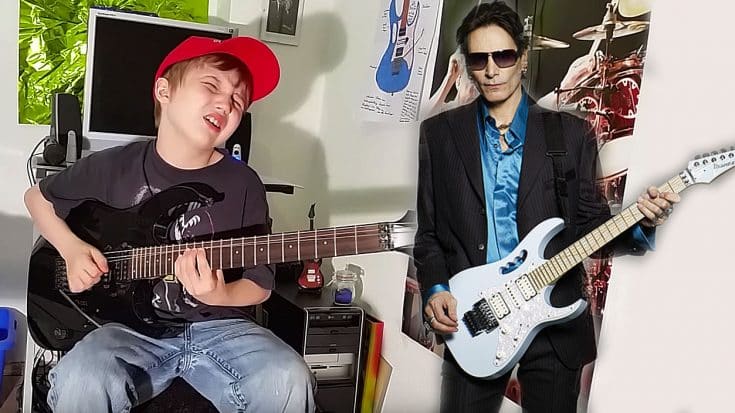 This Young Man Is The Next Great Guitar God!

It’s one thing to for an aspiring guitarist to try and cover a guitarist’s song in attempts to gage where his/her abilities are at, but it’s another to try and cover a song written by a prolific and legendary guitar virtuoso such as Steve Vai. If you plan on cover a Steve Vai tune, I’d recommend undergoing surgery to attach an extra finger, because if you plan on hitting all the notes in the same sequence as Steve Vai, that’s what you’ll need.

Professional guitarists who play for huge name acts even struggle to perform renditions of Steve Vai’s music. His music can be incredibly complex, but it’s NEVER unnecessarily complex. Steve Vai is undoubtably one of the most influential and revolutionary guitarists of all time time, literally. To this day, aspiring guitarists from all walks of life try to match his skill level. Most aren’t able to do so, but few are, and even fewer do it with flying colors!

What you’re about to watch is 10-year-old Dustin Tomsen take to his Ibanez guitar and perform what is considered Steve Vai’s most iconic song, For The Love Of God. As I said before, very few are able to cover Steve Vai’s music perfectly, and this is one of those rare moments! Don’t believe me? See for yourself!