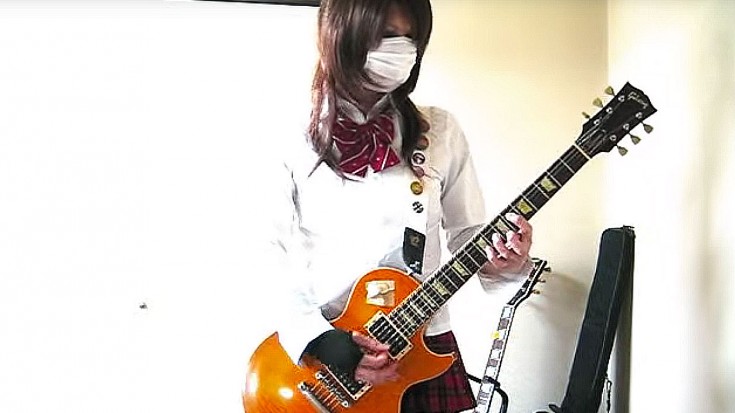 Got It Bad, Got It Bad – For This Cover!

We have no idea who this young lady is, and to be honest we don’t particularly care – all we know is that she absolutely shreds this Van Halen classic! Known to the YouTube world as Akunohana69, this relative newcomer is one of the video service’s best kept secrets, armed with only a Japanese schoolgirl outfit, surgical mask, and a Gibson Les Paul for a series of relatively anonymous takes on some of rock and roll’s biggest hits; Akunohana69 may look little…well, strange to the casual viewer, but when you’re able to tackle one of Eddie Van Halen’s masterpieces in the form of “Hot For Teacher” the way this talented young lady does, you can more or less get away with wearing anything.

Fun Fact: Not much is known about the YouTube user called Akunohana69. In every video with the exception of one or two, the Japanese teen appears wearing a white surgical mask in addition to a costume of some sort.

What’s interesting though isn’t necessarily Akunohana69’s outfit – it’s the ease with which she switches between rhythm and lead guitar playing, managing to bridge the gap between keeping a steady rhythm and still laying down an absolutely devastating guitar solo and throwing in a few fun tricks in there too, a la 80’s Eddie Van Halen. As far a YouTube guitarists go, we think it’s pretty safe to say this young lady definitely ranks as one of our favorites!