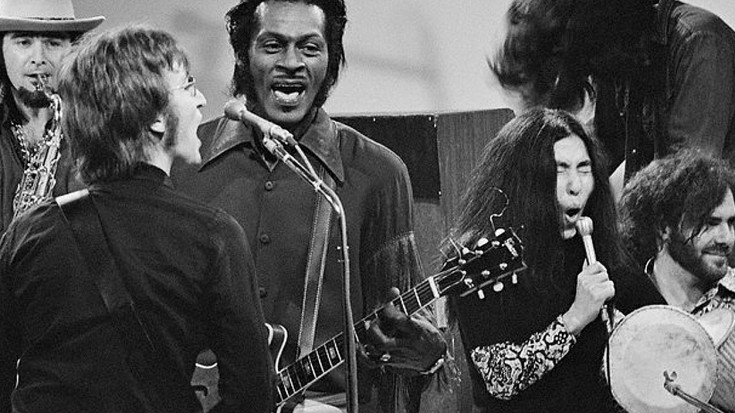 One of pop culture’s more self-indulgent figures, Yoko Ono is always good for a giggle or a look of sheer disbelief when it comes to some of the bizarre things she’s done over the years. In 1974, she and John Lennon took over The Mike Douglas Show for a week, with John joined by Chuck Berry for performances of ‘Johnny B. Goode’ and ‘Memphis Tennessee’ that were absolutely incredible…until Yoko tried to join in.

For John, it was a dream come true; for decades he hailed Chuck as the epitome of all things rock and roll, even going so far as to say that “If you tried to give rock and roll another name, you might call it ‘Chuck Berry’.”

Fun Fact: John’s son Julian recreated this performance with Chuck Berry in 1986 in his dad’s honor.

For Yoko, however, it was the perfect moment to share her “art” with the audience in the form of screaming mid-song…or so she thought. The highlight of this footage is the moment when Yoko picks up her microphone  and attempts to sing into it for a full 10 to 15 seconds before realizing that producers had actually shut it off! I guess they weren’t impressed by her rendition of ‘Memphis Tennessee’ earlier in the show.

Here’s the video of the original incident prompted the sound guy for The Mike Douglas Show to pull Yoko’s mic:

The look on her face (and the look of relief on Chuck’s face!) is sure to leave you laughing!