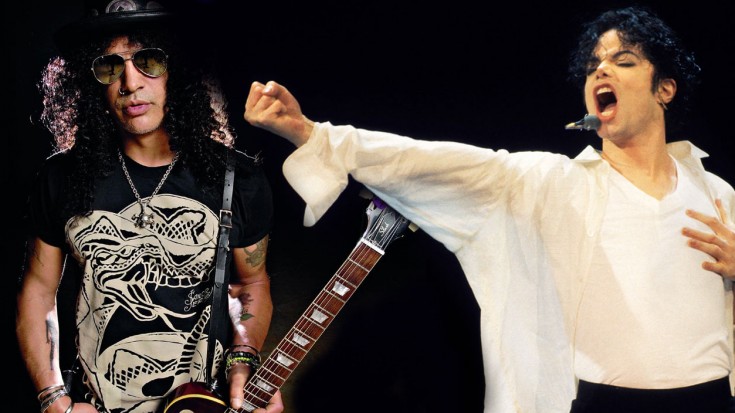 As Slash was requested on Michael Jackson‘s tour, he figured he would give a killer 5 minute solo during Michael’s “Black Or White” and whether it was planned or not, Slash delivered.

During this video it looks as though Michael is fed up with Slash’s playing and is trying to transition to the next song, however, Slash ceases to end the song and continues right on to melt the faces in the crowd clean off.

Following this awkward moment, Slash still continues to do what he does best ( maybe fans assumed that Axl had silenced and interrupted him enough throughout his Guns n’ Roses career) which initiates the introduction of Michael’s security guards that try to shoo Slash off stage.

Despite their best efforts, Slash fends them off physically and persists on making sweet love to his guitar for at least another 2 minutes or so as Michael stands there, arms crossed, impatiently awaiting the pending end.

Finally, after creating one of the most awkward “staged” situations, the lights go out at Michael begins his next set of the show with the beloved “Billie Jean.”

Fun Fact: This became a regular feature at Michael’s shows to buzz controversy and tension between the two.

Regardless of the fact that this was indeed staged, Slash blew Michael away, as well as the crowd, and really made a name for himself at this MTV VMA’s performance.