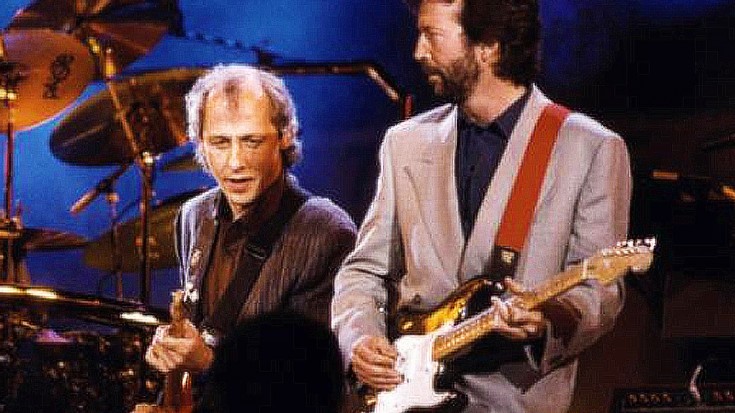 Ordinarily we’d love to open up a dialogue about Eric Clapton’s playing style versus that of Dire Straits axeman Mark Knopfler, but in this case we’ll forget about it and just marvel at how amazing these legends are when they get together! Worlds collided in 1988 when Clapton and Knopfler hit the stage together at Japan’s Tokyo Dome for an all-star performance that featured Dire Straits’ “Sultans Of Swing” and J.J. Cale’s “Cocaine” and can only be described as inspired.

Spanning over 10 minutes in length, the pair’s take on “Cocaine” is every bit as dramatic as you’d like, with an extended introduction highlighted by a thick, chunky bass line and of course, that gorgeous solo from Clapton that comes in right around 5:12; you won’t hear Mark trading licks back and forth with Eric on that solo, but considering he’s the one that tackles that plucky solo from “Sultans Of Swing” by himself, we’d say it’s more than fair and quite an even trade off! Whether you’re a fan of Eric, Mark, both, or neither, this is still a performance for the ages that’ll appeal to guitar fans near and far, so be sure to check it out in the videos below!