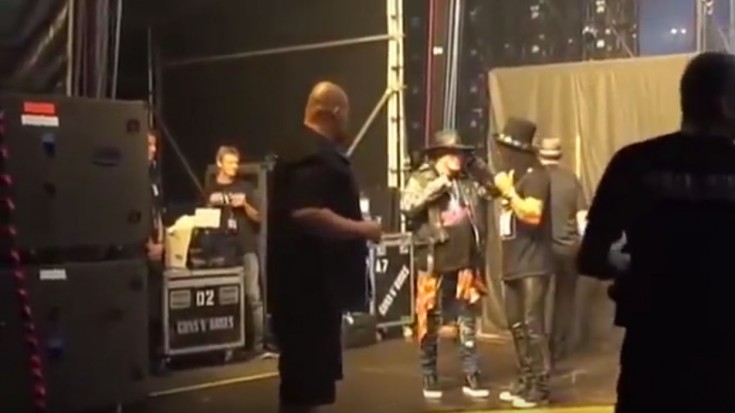 We Finally See For Ourselves How Slash And Axl Are Getting Along!

It’s no secret that Guns ‘N Roses frontman Axl Rose and lead guitarist Slash have had their differences. The animosity that has transpired has lead the the disbanding of its original members, but recently, to our delight, they have reunited and are taking the world by storm once again!

Though Guns ‘N Roses have reunited, there is still genuine speculation that the boys from GNR are just putting on a front and pretending to be friends just for the sake of selling out arenas on their current tour, but apparently it’s all genuine!

What you’re about to watch is Axl Rose and Slash share a truly heart-warming backstage moment after their show in Nashville showing once and for all the TRUE nature of the relationship between the two rock stars! It’s so refreshing to FINALLY see these true rock heroes get along. To see them bury the hatchet is a triumph not only for GNR, but for us fans as well. These two are pillars in the hard rock community and to see them come together is not only heart warming, but exciting! See for yourself!