Why Are Some Guitarists Super-Powered? SHOCKING Answer 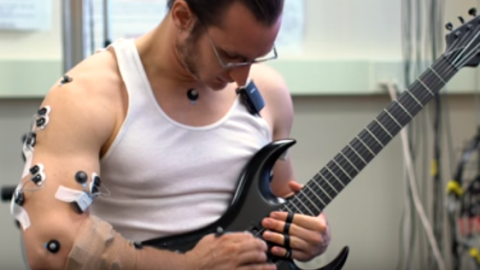 Let’s talk about your favorite shredder. Have you ever looked at them, listened to their music and thought: This is out of this world. How do they do that? Is it just an inborn gift? Acquired skill? Or does it have something to do with the gear they used? Just take Steve Vai, for example. He attacks strings they way no one else can — his tone, his vibrato, and his timing only proves why he has legendary axe skills. Yngwie Malmsteen on the other hand plays like the master virtuoso that he is. Zakk Wylde, in comparison, goes for a distinctive speed and a pretty wide vibrato.

Anyway, Guitar World decided to conduct a study on this and asked researchers to analyze data based on various factors.

We went out and got John Taylor—the last person to hold the Guinness World Record for fastest guitarist—and brought him to the Movement Biomechanics Laboratory at University of North Carolina Raleigh-Durham. They rigged him up to their $20,000 wireless EMG machine and let him loose on his fastest tremolo playing while recording the output.

This post will be updated as soon as results are posted. Stay tuned!