When The Red Hot Chili Peppers Get Into A Car With James Corden, THIS Is What Happens 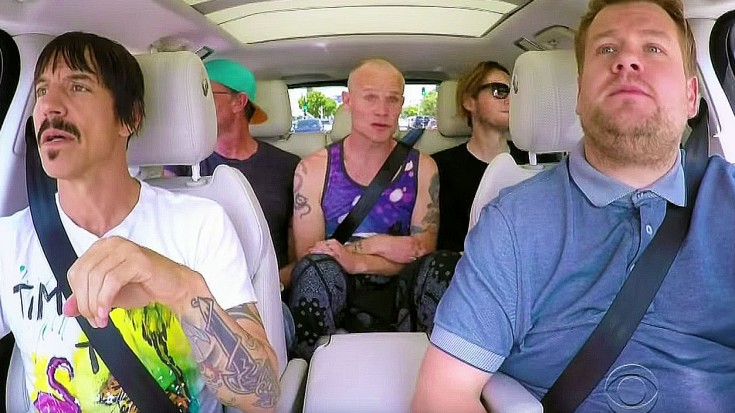 YouTube via The Late Late Show With James Corden

Not Your Mama’s Carpool!

Forget everything you thought you knew about carpools and karaoke! Comedian and talk show host James Corden of The Late Late Show brought laughter and fun to a nation mourning one of the worst tragedies we’ve ever known with this week’s installment of Carpool Karaoke. Packed into a Range Rover with well loved rock band and special guests the Red Hot Chili Peppers, Corden takes viewers on a hilarious ride through Los Angeles as he and passengers Anthony Kiedis, Michael Balzary aka Flea, Josh Klinghoffer and Chad Smith engage in a pretty epic karaoke session of the Chili Peppers’ biggest hits; from classics like “Give It Away,” “By The Way” and “Can’t Stop” to their latest smash hit “Dark Necessities,” that Range Rover was rockin’ and rollin’ all over the streets of Los Angeles.

So much, in fact, that at one point, the guys exit the car for an impromptu wrestling match on someone’s lawn (we won’t tell you who wins). Love ’em or hate ’em, this installment of Carpool Karaoke is bound to bring a smile to your face and with all of its singing, dancing, air guitar playing and sound effects interspersed with history of the band as told by the Red Hot Chili Peppers themselves, you’ll be left thinking of ways to make your own morning commutes this much fun!