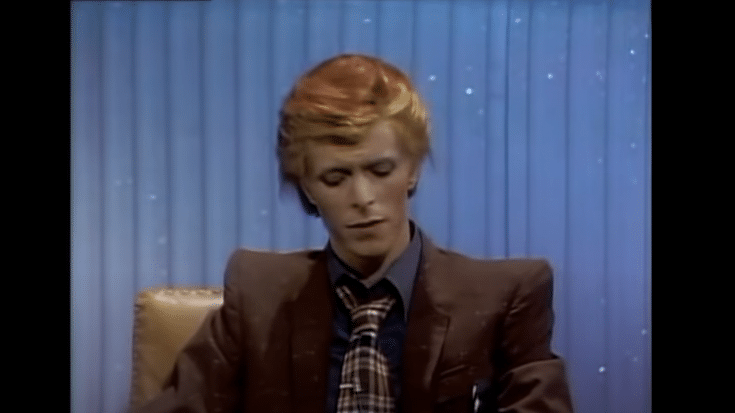 David Bowie reached his creative and artistic peak in the ’70s – churning out classic singles and albums which would go on to cement his legendary status. But that decade wasn’t all rainbows and butterflies for him. For regular folks, hitting rock bottom is bad enough but for rockstars like Bowie, it’s made worse because it was caught on tape.

That’s pretty much what happened during his guesting on The Dick Cavett Show on December 4, 1974 – it was filmed a month earlier on November 2 in New York while the iconic rocker was there for his shows at the Radio City Music Hall. He was so coked up and it was clear from the get-go that he wasn’t in his best shape. His drug use was getting out of control and it took a toll on his health, his creativity and consequently, his career.

He needed to promote his then-upcoming album “Young Americans” so he performed for the audience watching in their respective homes before sitting down for a chat with the host.

His performance was pretty good even if his voice was hoarser but it was during the interview that people noticed he wasn’t just noticeably thinner and weak but he was acting bizarre. The Thin White Duke was fidgety, cannot maintain eye contact with Dick Cavett and worst of all, could not seem to stop laughing.

It’s painful and uncomfortable to watch.

Bowie later commented, “It was horrendous. I had no idea where I was, I couldn’t hear the questions. To this day, I don’t know if I bothered answering them, I was so out of my gourd.”

But after this, Bowie sought help and got clean. Without depending on drugs 90% of the time, the result was three of his finest musical works – ‘Low,’ ‘Heroes’ and ‘Lodger.’