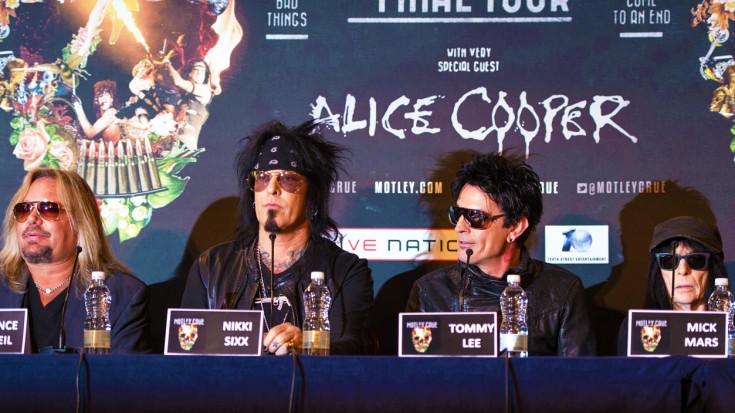 “We’re not enemies, but we’re not friends.”

It’s no secret that the guys in Mötley Crüe ended their 34 year run with some bad blood brewing; in recent days we’ve seen drummer Tommy Lee air his grievances with his former bandmates, blaming the band’s end on the noticeable lack of creativity and revealing that the final show of their career went from memorable to confusing when no one bothered to say goodbye afterwards. According to bassist Nikki Sixx, the animosity doesn’t stop there – not only did they hate being on the road together by the time the last show rolled around, they’re not even friends anymore, shedding light on the part of being in a band that no one ever really wants to talk about.

In the band’s long awaited farewell concert film The End, Sixx predicts a future for himself and his soon to be former bandmates that’s both sad and perhaps a little fitting, given their tumultuous history:

We’re not enemies, but we’re not friends … I’ll probably never see them, except in passing.”

Echoing the same sentiment is singer Vince Neil, who admits that there were times he “really hated everybody’s guts,” confirms that by the end Mötley Crüe was more of a business than a band, with politics involved that made functioning as a unit nearly impossible.

While we’re glad they pushed through their genuine dislike for each other and Mötley Crüe as a whole in time to give lifelong fans a chance to say goodbye, it’s pretty disappointing that at the end of it all they parted as co-workers instead of the friends they started out as 3 decades ago. Here’s hoping that the passing of time will let Vince, Nikki, Tommy and Mick patch things up to some degree before it’s too late.