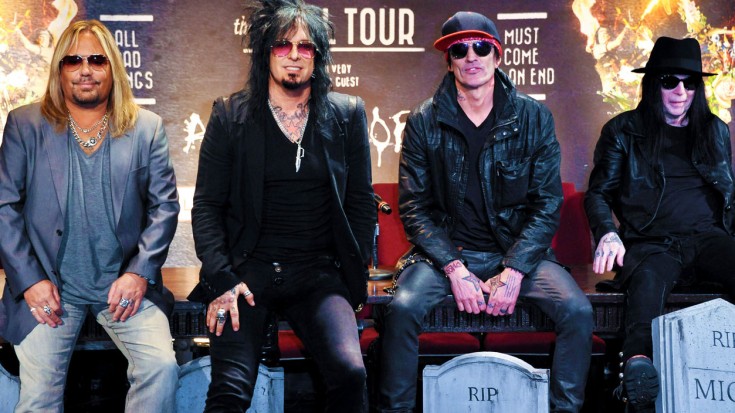 It’s been six months since 80s rock legends Mötley Crüe called it quits, shutting the door on their 34 year legacy with an explosive final show on New Year’s Eve. While fans are still talking about it – especially the part where drummer Tommy Lee was actually stuck in the air with his drum kit – apparently, they’re the only ones talking; according to Tommy, not only has he not spoken with his former bandmates since that last show, they never even said goodbye.

Adding insult to injury, Lee also says that bassist Nikki Sixx actually unfollowed him on Twitter the next day, though rock publication Metal Injection discovered that Sixx hasn’t been following Tommy for at least a year, adding to speculation that all wasn’t well in Mötley Crüe in the weeks and months leading up to their final show at the Staples Center on New Year’s Eve though the drummer insists he left the band with nothing but good memories and no ill will towards his bandmates whatsoever.

“After the final night, we had a big party backstage on New Year’s Eve, and I never saw the other guys,” Lee told Rolling Stone.

“We never even said goodbye. Strange as hell, dude.”

While he didn’t bother addressing the issue of unfollowing Tommy Lee on Twitter, Sixx did take to Twitter to address not saying goodbye or even attending Mötley Crüe’s after party:

Tommy’ right.I didn’t go to a aftershow party at 130:a.m. because my sobriety from drugs & alcohol are my priority and I was with my kids.

Looks like Tommy’s comments struck a nerve! We may never know the truth of what’s been brewing within Mötley Crüe, but it’s a shame that they seem to have ended on such a sour note after 3 decades. Here’s hoping they eventually patch things up!