Oh No! Did Nikki Sixx Unfollow Tommy Lee On Twitter After Their Last Show Together?

Ladies and gentlemen, this is the most important news in the Twitterverse today. Tommy Lee just revealed during an interview with the Rolling Stone magazine that Mötley Crüe’s co-founder Nikki Sixx unfollowed him on Twitter just a day after the band’s final concert. Their last show was held last New Year’s Eve at the Staples Center in Los Angeles.

“It’s kind of strange, man. We’re a fucking weird band. Even stranger, after the final night, we had a big party backstage on New Year’s Eve, and I never saw the other guys. We never even said ‘goodbye.’ Fucking strange as hell, dude. I mean, what the fuck? [..] I mean, if you’re getting divorced, you still give your ex a hug, or flip her off or something. You either get a kiss or a slap, or … something. Give me a sign! Let me know you’re alive. [..] I think fucking Nikki unfollowed me on fucking Twitter, like, the next day, I was like, ‘Wow. Okay, dude.'”

Okay, my investigative senses are tingling. Time to check out if this is true. So I used the “Twitter Follow Check” and guess what? They don’t follow each other. 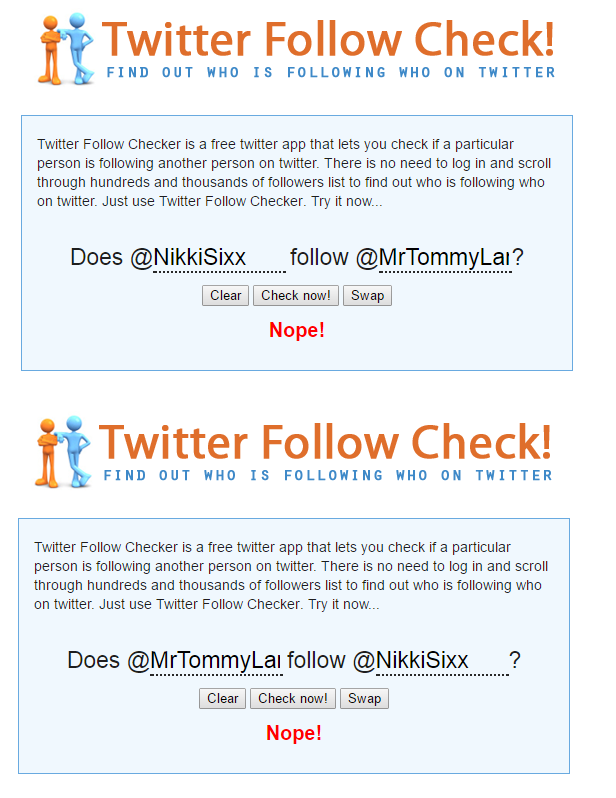 Hmmm. We can all go back to our lives now. 🙂 But hey, don’t think there’s bad blood between them because Tommy had this to say about the iconic band.

I don’t have ill feelings at all. I’m saying this with a smile on my face. I’m just happy to be part of something that was so impactful on so many people’s lives musically and lifestyle-wise. That’s pretty fucking insane, and I’m really happy that we decided to end it on a high note and not really drive this thing into the ground like so many of our other musical peers have. It’s just really cool and quite an honor to kind of bow out when it’s still larger-than-life. It could have gone a different route.”

So there. All is well for everyone. 🙂