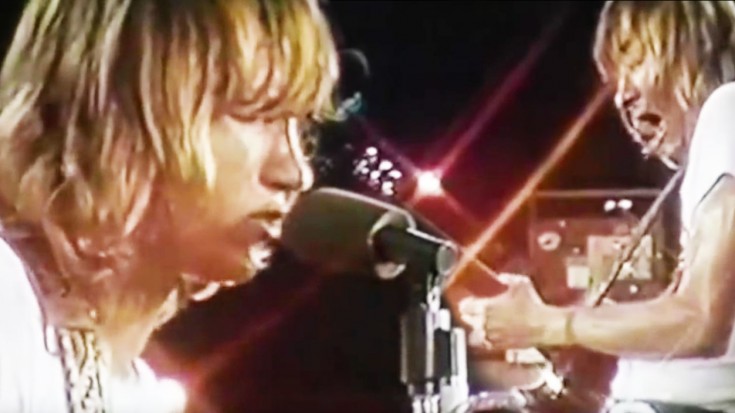 Not One But Three

Before Joe Walsh replaced Bernie Leadon as an Eagle in 1975, he was making beautiful things happen like these 3 insane guitar solos during his legendary “Turn To Stone” performance in ’72. From gold- certified So What album, released in ’74, this track simply rests as one of the artist’s greatest showcases throughout his long and successful career that reached #93 on the Singles charts one year later.

Interesting Quote: “I know this album’s going to be an important one for me, but it’s not easy to just crank them out anymore, I’ve got, what, six or seven albums out. I don’t want the next album to sound like a bunch of outtakes from [The] Smoker [You Drink, the Player You Get]. I want it to be the difference between Revolver and Sgt. Pepper’s Lonely Hearts Club Band. I’ve held back [the album’s release] until that development was there, even though the record company’s been screaming for it. I want it to be a big, big step… in thoughts, vocals, playing and maturity.” – Joe Walsh

We know that Joe was definitely one of the best Eagles but this performance just reveals a completely different and almost transcendent level of Walsh that most fans have unfortunately not seen… As you gaze upon the frustrated yet exhilarated face of Joe during the performance, you can see the passion behind his eyes and lyrics while he shreds some of the best guitar work ever.

He single-handedly took the song to the next level. It’s flawless, intense, powerful and memorable. There’s no way you can watch this and not be left in awe. Just Joe Walsh dropping jaws whenever he plays!

Joe’s solos and musical commitment in this absolutely stunning performance will have some type of effect on you as you, like we all do, eventually “turn to stone” …