We Came Up With The Perfect, Dream Coachella Lineup! 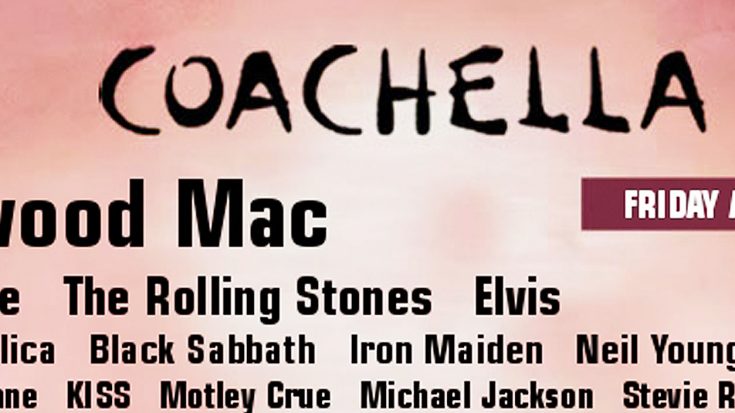 It’s pretty clear no music festival lineup will ever top Woodstock in 1969, but it’s always nice to dream. Since Woodstock, hundreds of music festivals across the world have sprung up bringing in the most popular music acts of yesterday, today and the future. One of the more popular festivals is the Coachella Valley Music Festival in Indio, California. For two weekends in April these polo grounds become the site of the hottest (literally) music festival of the year bringing in all of the biggest acts. The festival’s lineup over the years has evolved, so we at Society of Rock felt it would be necessary to draw up our own dream Coachella lineup of classic rock musicians! Again, this is a dream lineup, so this was made as if all of these artists were still alive and every band was still together.

Obviously it was incredibly difficult to pick the headliners, as any of the artists on this poster could easily headline any festival. But, we decided to go with three of the most popular bands/artists of all time: Fleetwood Mac, Led Zeppelin and Jimi Hendrix. We also went with a pretty good mix of metal and just straight rock, and threw in some alternative and pop in there as well just to keep the variety fresh. And if you didn’t notice, Jimi Hendrix closes out the festival. The man singlehandedly shut down Woodstock, so it’s only fitting he would shut down this festival as well! Hopefully you see all of your favorites in there, but if we missed anyone, please let us know!

Speaking of dream lineups, a once in a lifetime festival similar to this is happening in October called Desert Trip! Check out the trailer for it down below!