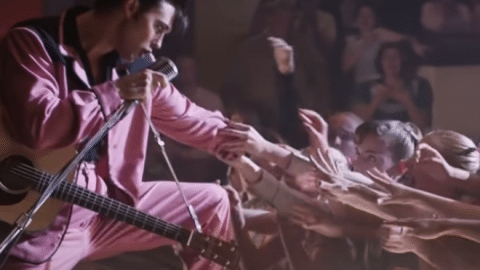 The long wait is over! “Elvis” biopic of the King of Rock and Roll, Elvis Presley, has released its first trailer revealing the outstanding cast.

Oscar-nominated filmmaker Baz Luhrmann, known for Moulin Rouge! and The Great Gatsby first announced the anticipated film in 2014 and confirmed the release date in November. After almost 8 years, they have finally dropped the film’s first full trailer on February 17.

The story travels back to Presley’s childhood, discovering his passion for music in a church and later rising to fame in the middle of the American cultural changes to his marriage with wife Priscilla Presley played by Olivia DeJong. We’ll see Presley’s life through the eyes of his longtime manager Colonel Tom Parker played by Tom Hanks.

The trailer shows how Parker immediately sees the young Elvis’ potential after the singer drove audiences, especially the young female fans, wild. Their partnership spanned over 20 years beginning with Presley’s discovery all the way to his extraordinary stardom.

On the trailer, Hank’s Parker starts telling the story by stating:

“There are some who’d make me out to be the villain of this here story.

“Are you born with destiny? Or does it just come knocking at your door?”

As for the actor playing Elvis, it’s Austin Butler, who we’ve seen on 2019 films The Dead Don’t Die and Once Upon a Time in Hollywood. Butler was chosen against other actors who auditioned for the role such as Ansel Elgort, Miles Teller, Aaron Taylor-Johnson and Harry Styles.

On a press release, Butler stated:

“That’s what got the fire burning inside of me. Ultimately it’s the life that’s important. You can impersonate somebody. But it’s to find the life within, to find the heart.

“Elvis is such an icon and he’s held up to a superhuman status. To find the human within that icon, that was the real joy.”

Butler confirmed he is the one singing in the movie. He told The Hollywood Reporter:

“When I began the process, I set out to get my voice to be identical. That instills fear. So that got the fire burning. For a year before we started shooting, I was doing voice coaching. I watched as much [footage of Elvis’ concerts] as I could, over and over. I feel such a responsibility to Elvis and to Priscilla and Lisa Marie, and all the people around the world who love him so much.”

“Elvis” will hit the theaters on June 24 in North America and internationally on June 22. Watch the trailer below.