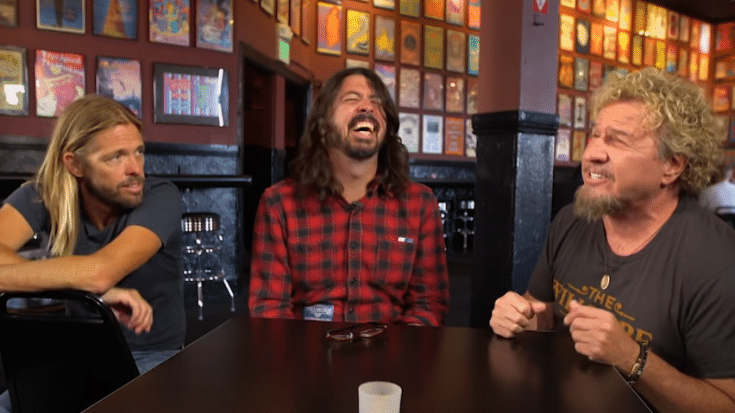 Hagar started by asking Grohl if there are times where he loses his voice and Dave go on saying that he always write his music in acoustic guitar first and singing it in falsetto, then jokingly said that later on he will realize that it’s too high for him.

After that, Hagar compliments the two in their performance at the 2008 London festival in Wembley Stadium, where Grohl played the drums and Hawkins sang Led Zeppelin’s Rock And Roll with special guest appearances by Jimmy Page and John Paul Jones.

Hagar says he was so impressed with Hawkins’ voice and had no idea that he could sing that high. He said he was watching it from his home and was jumping from his couch. Then Grohl said that Hawkins has his own records himself. Hawkins then added that he is a huge fan of Roger Taylor from Queen.

Next thing you know, they were playing a segment called “This or That” where they would pick an answer from the two choices given to them.

Hagar started with the question “Beatles or Stones?” where Grohl said Beatles and Hawkins pick the Stones. Another question was “Drums or Guitar?” And Grohl answered “Drums” while Hawkins said “Guitar” and lastly Hagar asked “Foo Fighters or Nirvana?” and Hawkins immediately shouted “Nirvana” and Grohl just laughed.

After the fun interview, the pair performed Foo Fighters’ hit The Sky is a Neighborhood. Watch the video below.