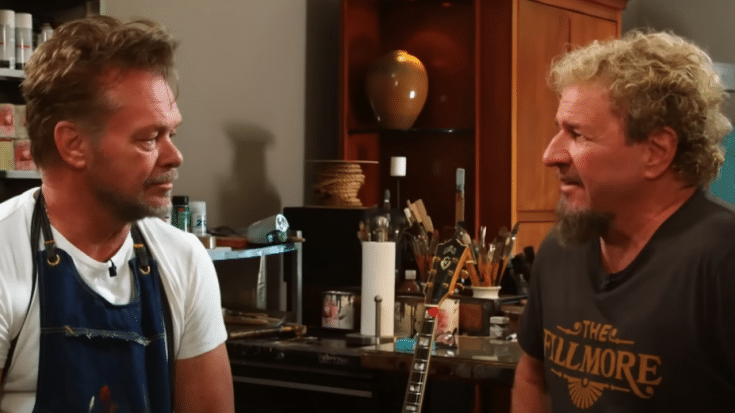 Many people don’t know that aside from making music, John Mellencamp is passionate about painting.

In an episode of Rock and Roll Road Trip with Sammy Hagar, Mellencamp shared how he went to pursue his art career, but got into music instead, saying:

“I went to New York when I was fresh out of college, to go to the New York Art Students League and on the way there, I accidentally got a record deal.

“When I got my first record deal, I didn’t even own a guitar. I had been singing in local rock bands on the weekend just to make money. So I had a demo tape [and] I thought if I’m gonna be in New York, I might as well just drop these off and see what happens.”

Mellencamp then got the call from the record company, but didn’t know if he got accepted from the painting school he was supposed to go to. He added:

“The idea of writing a song was like, ‘What?’ Taking care of business is good enough for me. I’m making a living singing, taking care of business… You know, I was in a cover band. So writing song never even dawned on me and that’s why my first records were so terrible.”

The rocker also admitted that he actually didn’t like to be on the spotlight, he revealed:

“I have always struggled with the idea of being a monkey on a string and keeping my own integrity and doing it my way and trying not to follow a path that others have laid.

“I got some really good advice from a really smart guy when I was real young. He said, ‘John, go where they’re not. Do what they’re not doing,’ and then he said, ‘Keep it small but keep it going.’ And everybody else was trying to become this thing and for me, it was like I was trying to withdraw from all of that. I found myself I was like, “Okay, well fuck it, we’re in it. Let’s just do it.”

He continued about not wanting to get sucked in on the fame and fortune, saying:

“I wrote a song called “Pop Singer” and it says ‘Never wanted to be no pop singer / Never wanted to write no pop songs / Never wanted to hang out after the show.’ And I caught so much shit for that song ’cause it was just like, ‘Man, you’re biting the hand that feeds you,’ and my response was, “So what? So what do I care?”

Asked what he really wants to do, Mellencamp stated: