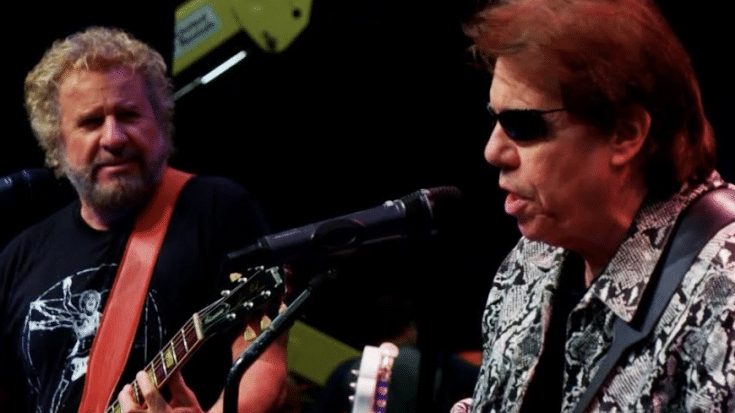 In an episode Rock and Roll Road Trip, George Thorogood and Sammy Hagar discussed all things about music and then take the stage to play and rock out.

“It wasn’t out of design. When I first started playing the guitar, I’m uneducated on the guitar. I’ve virtually had no guitar lessons and my style was very raw, very off-the-meter. I’ve made a lot of mistakes but I listened to primarily blues records to learn the instrument. As Robert Lockwood once said to me, ‘You remind me of John Lee Hooker. You play correctly.’ I said, ‘I do?’ He said, ‘Why? Because you play wrong.'”

“So my style was pretty primitive. Pretty raw, to begin with. When I do that, people say, ‘Ah, that kid is always trying to make it sound authentic.’ And our bass player Billy Blough would say, ‘No, this is George trying to clean up his act.'”

While talking about his music influences, he said:

“My first rock and roll hero was the same as everybody else’s–same as yours and mine.”

Then Thorogood continued with a joke:

“But I can’t say his name right. It was either Mick Richards or Keith Jagger. Whoever that guy is.”

He also shared some stories during the time he opened for the Stones:

“It’s my dream, man. They were so pleasant to me. People say, ‘You open for the Stones.’ and when I’d say that almost to everybody in the scene, they say, ‘No, you’re not the opening act. You are on the bill. You are on the show. You just happen to be playing first.’ That’s how classy they were. That meant a lot to me. They couldn’t have been nicer. It was like my birthday and Christmas morning rolled into one. It was like the first day of summer vacation.”

Asked how the King of Rock and Roll influenced him, he said:

“When Elvis Presley hit, I was young, very young. Because I was so young, I did not know rock and roll was a new thing. I thought it had been around forever. When Elvis Presley came along, we could feel the vibrations right in Northern Delaware where I live. The guy was literally shaking the planet.”

Watch the full video below.