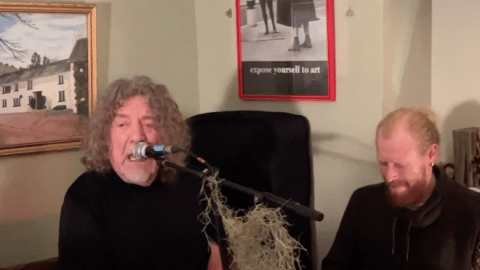 Robert Plant played at a pub in Shropshire with members of Saving Grace.

In the later part of November, Plant performed with members of his band Saving Grace at a bar in Shropshire, England. He was also joined by C and Tommy McLain, the two other American musicians on that show.

Plant was witnessed performing on stage alongside McLain, Adcock, and Peter Bullick, the brother-in-law and bandmate of John Bonham’s sister Deborah Bonham. The bar where it took place even uploaded the undated video on their official Facebook page, you can watch it here.

In other videos, Plant was seen reunited with McLain and Adcock at the bar on November 27 with Suzi Dian, Oli Jefferson, and Matt Worley from Saving Grace. They were seen playing “Season of the Witch,” with Adcock adding the “Whole Lotta Love” riff at the song’s end. Another video posted to Instagram shows the group playing “Before I Grow Too Old,” watch it here.

Meanwhile, Plant has been traveling across different places and working on his solo career over the years. Raise the Roof, his most recent album, was published in 2021.