Watch Rage Against The Machine’s First Performance After 11 Years 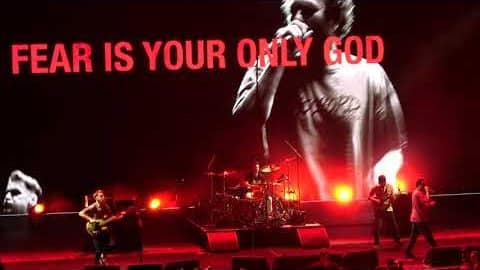 Rage Against the Machine performed in East Troy, Wisconsin, kicking off their Public Service Announcement tour on Saturday, July 9, which marks as their first performance in almost a decade.

The band blasted through a 16-song set including of hits like “Bulls on Parade,” “Sleep Now in the Fire,” “Guerrilla Radio,” and “Killing in the Name,” as well as their rendition of Bruce Springsteen’s “The Ghost of Tom Joad,” which they hadn’t performed live in 2008. (“Tire Me,” “Without a Face” and “War Within a Breath”).

While performing, the band included some intense visuals on the screens behind them, including an El Paso police car on fire and a group of refugees in a boat; at one point, the words “Abort the Supreme Court” appeared. However, according to Rolling Stone, the band did not address the audience.

The last time Rage Against the Machine performed as a group was on July 30, 2011, at the Los Angeles Memorial Coliseum. Aside from rappers Chuck D of Public Enemy and B-Real of Cypress Hill, three-fourths of the band—guitarist Tom Morello, bassist Tim Commerford, and drummer Brad Wilk—formed Prophets of Rage from 2016 to 2019.

While, Zack de la Rocha, the only vocalist from the band who did not take part in the Prophets of Rage, has intermittently contributed to the songs by other musicians, such as the hip-hop combo Run the Jewels, who will support Rage on their upcoming tour.

The COVID-19 epidemic delayed the launch date of the Public Service Announcement tour twice from its initial 2020 start date. The first leg will now take place on dates in both Europe and the United States through September. Beginning in February 2023 and ending in early April is the second leg that will take place in North America.