Watch Patti Smith Perform A Cover Of “After The Gold Rush” 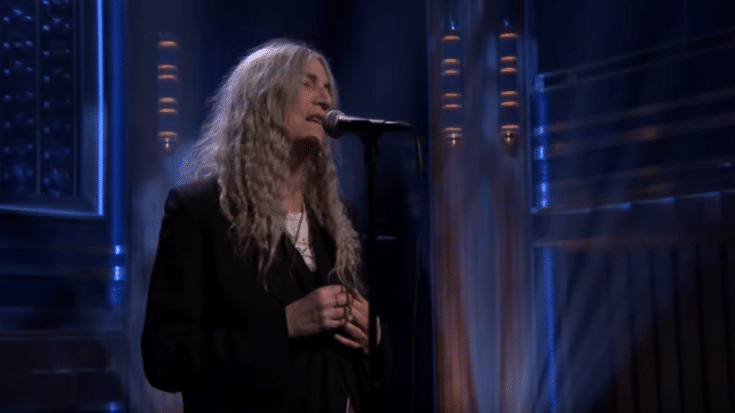 Patti Smith recently dropped by The Tonight Show to chat with Jimmy Fallon and perform a stunning cover of Neil Young’s 1970 classic “After The Gold Rush.” She began with a short poem and just before she finished reading, musician Tony Shanahan started playing “After The Gold Rush.” It’s a lovely and unforgettable rendition. This is her first appearance on The Tonight Show and it’s for the support of her new memoir titled Year of the Monkey which was released last year.

She also talked about various topics including that time when she was a jerk to folk icon Bob Dylan. It was in 1974 when she saw him backstage during one of her shows. She told Jimmy Fallon, “He says, ‘Hey are there any poets in here?’ And I said, ‘I hate poetry!’ I acted like such a jerk. I don’t know what came over me. Like Sixteen Candles, when you like the boy but you don’t want the boy to know you like them.”

Patti Smith is set to perform at the 33rd annual Tibet House benefit concert this February 26 at the Carnegie Hall in New York City. Iggy Pop, Phoebe Bridgers, and Margo Price are also part of the lineup.