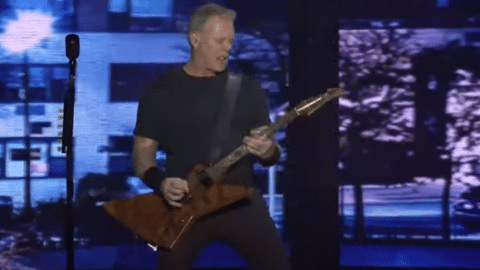 Metallica are streaming a pro-shot footage of them performing their classic hit “Fade to Black” during a concert on November 6 at the Mercedes-Benz Stadium in Atlanta, Georgia — the second night of ATLive. The two-day festival was first announced in July, and they were joined by Cage the Elephant and Greta Van Fleet.

“We’re honored to be part of the second annual ATLive two-day festival — featuring two unique, separately ticketed events — this fall when we’ll be hitting the stage with our friends CAGE THE ELEPHANT and GRETA VAN FLEET,” Metallica said in a statement during the announcement. “Night one features country music’s finest with George Strait, Eric Church and Caitlyn Smith kicking off the weekend.”

“Presented by AMB Sports and Entertainment, the organization will generously be donating a portion of the proceeds from ATLive to All Within My Hands,” they continued, “to help our foundation further its work in the fight against hunger.”

The last time Metallica played at Atlanta was four years ago on July 9, 2017 during the WorldWired North American Stadium Tour. The November 6 gig was the first time in over two decades that they played “Whiplash” in the said city. They last played it at Atlanta on April 23, 1997.