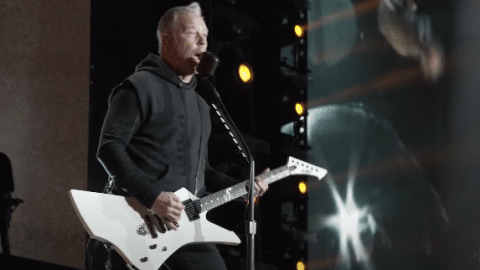 Metallica shared a newly official footage of their latest live performance of the 1983 classic, “Seek & Destroy.” The video was taken from their recent concert at Campo Argentino de Polo in Buenos Aires, Argentina, held on April 30.

The hit song was part of the band’s debut album, Kill ‘Em All, which didn’t arrive on the US Billboard 200 chart until three years later, where it peaked at No. 66 and sold 3 million copies Stateside.

The concert in Argentina was the second stop on Metallica’s current South American Tour. The trek launched in Santiago, Chile and will continue with a series of four concerts in Brazil after the upcoming show in Belo Horizonte on May 12.

The band is also set to perform at Major League Baseball’s San Francisco Giant’s 8th annual Metallica Night at AT&T Park on May 24 before playing two US events, Bottlerock in Napa Valley, CA on May 27 and Boston Calling on May 29.

During their recent performance of “Seek & Destroy,” the crowd can be heard loud and clear, going wild as they sang in chorus. You can watch the video below. Some of the comments read:

“It’s one of the happiest Metallica while playing a song I’ve seen in years. Glad to see the guys still have so much fun with their music. And kudos to the crowd, they definitely helped it!”

“Can we point out that we can hear the crowd singing every word to the song in this video? It’s awesome!”

“Man, the crowds in Buenos Aires are just on different level.”